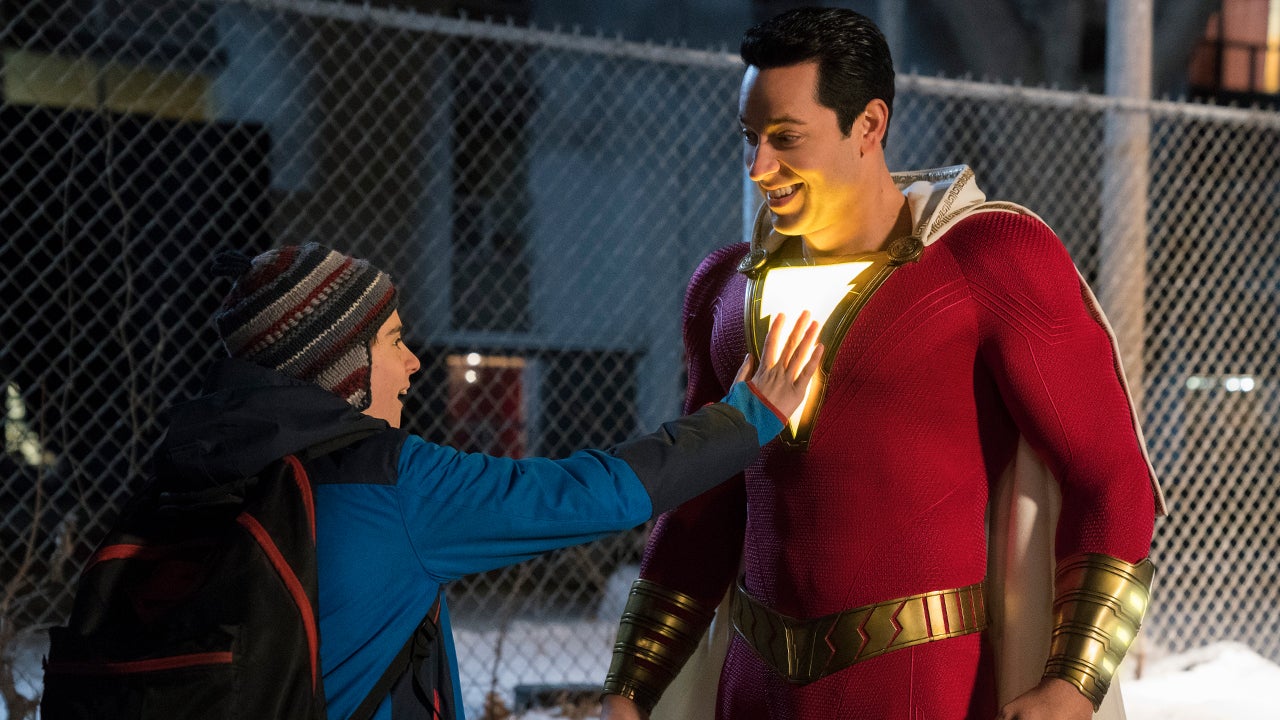 When the first trailer featuring Zachary Levi as Shazam hit the internet during this year’s San Diego Comic Con, fans got their first glance at the most light-hearted, hopeful and exciting superhero the DC Universe has yet put forward.

The opportunity to play the iconic (albeit somewhat obscure) hero was an exciting prospect for Levi — especially after playing a minor character, Fandral, in the Thor franchise as part of the Marvel Cinematic Universe.

However, Levi recently spoke with ET’s Ash Crossan, and the actor explained how one of the most thrilling aspects of taking on the role is the future possibility of getting to team up with DC’s biggest heroes in a future Justice League movie — just like his character’s comic book counterpart.

Levi said he is “one hundred percent” looking forward to the possibility, and explained how the first tinges of excitement came before he’d actually secured the role. While driving through Hollywood on the way to a screen test for the part, Levi said he saw a poster for last year’s Justice League movie, and it was enough to get his mind racing.

“I’m looking at these posters going, ‘If this all goes well, and I get this job, and we go make this movie, and it does well, and this does well then I’ll be, theoretically, I’ll be on that next billboard with all those characters,'” he recalled. “So I haven’t just been thinking about it since I’ve been the character, I’ve been thinking about well before I got the job!”

In Shazam!, 14-year-old Billy Batson (Asher Angel) is a street-wise foster kid who ends up being chosen for a higher calling, and is given the incredible power to turn into an adult superhero with immense powers (played by Levi) just by shouting “SHAZAM!”

However, even as an adult hero he still has the mind and personally of his teenage self.

“[It’s] essentially the movie Big meets the movie Superman,” Levi explained. “I’m a man-child [so] this is the greatest — I barely have to act half the time!”

Given his character’s youthful personality, Levi said the possibilities for development, hijinks and complications are endless if he joined the Justice League in a future film.

“I’m a 14-year-old and we’ve got Wonder Woman there and just having a total crush… Like, how do you act cool when you’re crushing on the most beautiful woman in the world who also happens to be a goddess?” Levi suggested.

“And trying to act cool around Superman and Batman and all that stuff? I mean, my brain was just immediately going to all those possibilities cause I think it would be a whole lot of fun.”

“We’d literally be racing each other [all the time],” Levi said. “I think I’d be trying to arm wrestle Superman all the time. We’d just be goofing off. Oh God, I want it to happen so bad!”

Looking back at the long road he’s been on to become this character, Levi explained that it all didn’t really begin to sink in until he actually donned his superhero suit for the first time — an experience he described as “crazy.”

“It was insane. It made it made it very real in that moment,” Levi said, adding that, even now, “It doesn’t feel entirely real… [but] trying on the suit definitely gave it a little bit more reality, to me.”

“There’s one [scene] where there’s like, this mist and fog and I’m standing up in this big, strong, heroic pose and the light from my chest was shining through the mist and it felt really cool in the moment,” Levi reflected. “Then, I went back and I watched it on the monitors, I was like, ‘Holy crap! I’m a bonafide superhero and I want to look like this at all times!'”

While movies in the DC cinematic universe have earned a reputation for being dark and gritty, Shazam! is being celebrated for its fresh and downright comedic take on the superhero mythos.

According to Levi, the film is also one of the only movies in the franchise that acknowledges the in-universe reality in a very meta way.

“Our movie takes place very squarely in the DC Universe. In fact, I would argue that we’re kind of the most self-aware of it because the movies that we all watch — I mean, Aquaman and Wonder Woman, Batman, Superman— they’re all basically documentaries in their world,” explained Levi. “These things, these are all real events that have happened. Batman and Superman fighting, Superman saving all of Metropolis, whilst simultaneously destroying the entire city — that all really happened.”

And yet, as seen in the first trailer, one of Billy Batson’s friends and closest confidants — a fellow teen named Freddy Freeman — has a big collection of comic books and superhero stories that inform his understanding of how real superheroes operate in their world.

“These are real figures and Freddy’s obsessed with all of them, as are most kids and people,” Levi said. “Once Billy gets these powers, he immediately goes to Freddy, saying, ‘I don’t know how to do any of this stuff. I need your help!’ So Freddy becomes the coach, and through that Billy learns a lot about all of these other characters.”

Fans will get a chance to see exactly how Billy Batson and his super-powered alter ego fit into the DC universe when Shazam! hits theaters April 5, 2019.