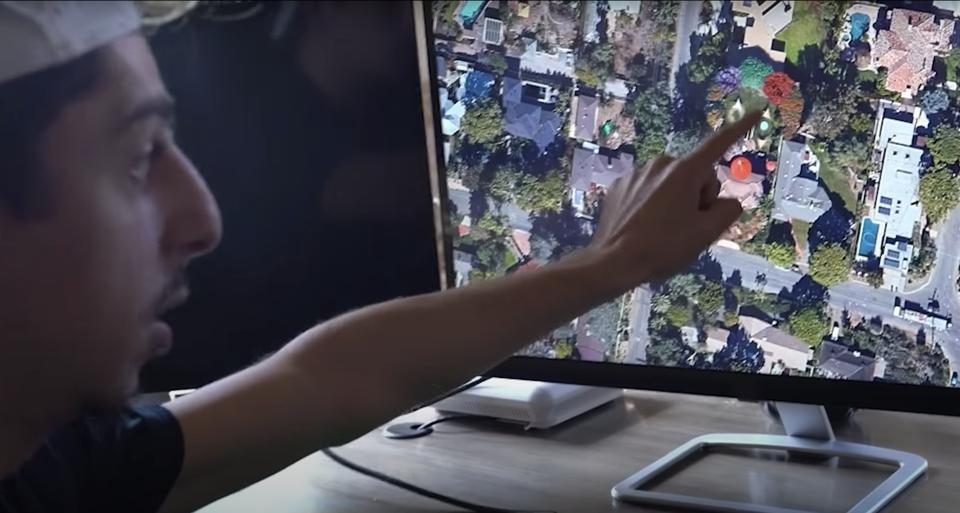 The film, which is streaming starting Thursday at 6 p.m. PT / 9 p.m. ET only on Inviz.tv, follows FaZe Rug who plays himself moving into a multi-million dollar home (his own) after his success as an influencer.

What begins as a typical YouTube vlog highlighting his new house turns into a horror movie — thanks to his neighbors.

Plotkin and FaZe Rug talk about making the film during the pandemic and FaZe Rug’s experience moving from YouTube to feature film.

Can you share how you were approached to be in “Crimson” and to star in a horror movie?

FazE Rug: My manager came to me one day and asked if I wanted to be in a scary movie, and it was a no brainer because I love scary stuff. I loved making scary videos on my YouTube channel, so I said yes without even hesitating.

A few months after I had agreed to do it, I found out that Greg was going to direct it, and thought, ‘This is going to be a hit.’

Greg, how did you get involved to do this and what was it about “Crimson” that stood out for you?

Gregory Plotkin: It was one of those unique opportunities where during the pandemic, the town had shut down. I’ve edited films and directed and this came up. I have two kids who are massive fans of his and he has this amazing outreach. My kids would tell me intimate things about him as if they knew him.

I thought it was a great way to try something new and to work with new talent. My kids consume more media through YouTube than any platform, and I think this is a huge part of the entertainment future. It felt like a unique way to stay creative and to work with some great people, especially during this uncertain time in filmmaking.

How did the story evolve or change because of the pandemic and how it was going to be told?

Plotkin: There was a treatment for the film, which laid out a general sense of what we made today. But again, some of it had to be redeveloped because of the pandemic because of the lack of locations available and the number of people available.

What about your collaboration process of developing the story together?

Plotkin: The other change I made was that I felt the initial pass that I read didn’t pivot towards his strengths, and that’s where we collaborated to let him be himself.

I wanted him to feel comfortable and to take ownership of the story of what was happening. So, we had a lot of conversations, and the whole project was definitely a collaboration.

FaZe Rug: I was super scared before because I thought, ‘I’m not an actor. I can’t memorize lines like this. I can’t do this stuff.’ When I met Greg, we clicked right away and he made us feel so comfortable on set, but as he said, he let us be ourselves.

He also did a lot of takes so he could choose the best one. I think the best thing he did was in allowing us to be ourselves while still following the direction of this scary and intense plot.

Gregory, did you tell FaZe Rug about the “Paranormal Activity” audition process where you just tell someone they’re a football player and they act that out on cue?

Plotkin: I didn’t. But being involved with all the Paranormal films – those films were loosely structured, where we shoot for a bit and use 5% of it and throw the 95% away, and we do it again to build.

We didn’t have the luxury here, but that was the spirit we tried to keep here and not keeping it too structured. It was about finding gold in the ad-libbing.

Brian was so comfortable and brought so much energy and so much life to it.

Faze Rug: It’s so funny because in high school, I was a shy and awkward person. After I started vlogging, I started to feel more comfortable about talking in front of the camera.

My fans also made me feel comfortable just in the support they give me. I feel after eight years, I’m starting to get more better at this and feel more natural on camera.

The film takes place in your real home, did you ever feel scared after Greg and the crew left, you know, like the house was going to be haunted?

FaZe Rug: What Greg wanted to do was get natural reactions so he’d scare me without me knowing to get those reactions you see. In general, I was scared. I didn’t feel that I was going to die, but during the shoot, not knowing when Greg was going to creep up to make sounds made for a good movie because all of those reactions are genuine.

Plotkin: The one thing I realized was there were a lot of windows in his house and there was a lot of open space that we could use. We tried to make the rooms not look as glamorous as his YouTube videos.