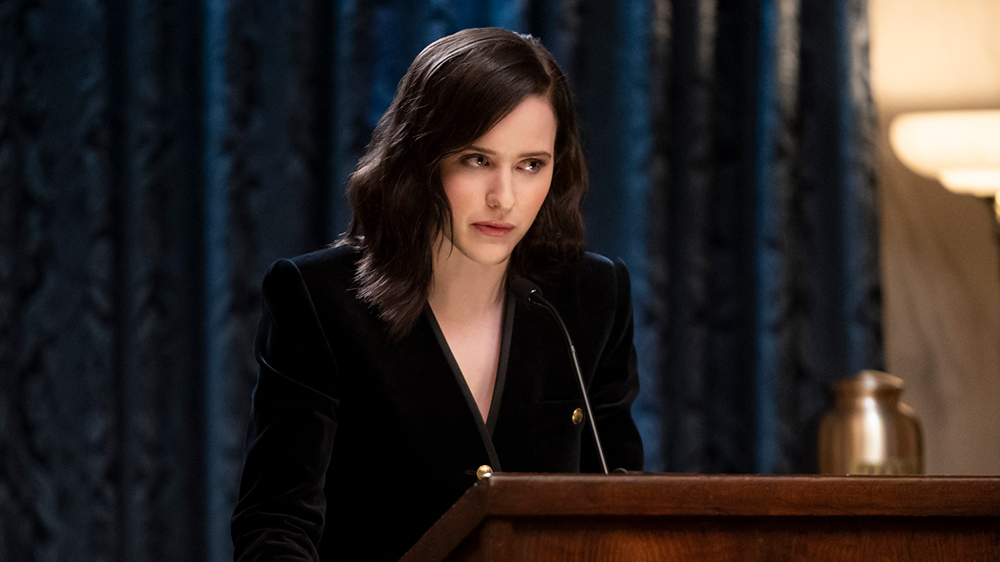 Director Linda Mendoza has more than three decades years of production experience across scripted and specials content, and ironically it was HBO’s “Greater Tuna,” which she worked on in 1984, that best prepared her for Amazon Prime Video’s “Yearly Departed.”

“Greater Tuna” featured two lead actors playing all of the roles of the inhabitants of the small-town of Greater Tuna, Texas in the comedy project, which meant its visual style needed to feature a lot of locked-off shots, with a heavy post-production lift to insert the same two actors into a scene multiple times, in each role. Because “Yearly Departed,” a “variety special meets ‘Waiting for Guffman,’” as Mendoza puts it, was filmed amid the COVID-19 pandemic, it, too, isolated performances and dropped them into the same scene via VFX.

“It was a very long process just thinking about how do you put people in a room when they can’t be in the room? A lot of it was honestly like ‘The Queen’s Gambit,’ working out who moves where, even figuring out that opening of walking in and showing them in that room together without having them in the same room together,” Mendoza tells Variety.

The hour-long “Yearly Departed” special features performers from Phoebe Robinson, Tiffany Haddish and Sarah Silverman to Rachel Brosnahan, who also executive produces, delivering eulogies for things we said good-bye to in 2020. Most of these things, such as casual sex and pants, were casualties of the pandemic, which allowed each eulogy to teeter between serious and poignant, and stand-up comedy-level funny.

“We wanted to make sure that the project reflected the genuine scope of the things we dealt with this year. We wanted to approach all of those things creatively and with humor, but it was important, if we were going to experience the collective catharsis through laughter, that we don’t leave anything out,” Brosnahan, who delivers a eulogy to pants in the special, tells Variety. “I said, ‘Sure, I’ll take my pants off for art. I can’t wait to say “fuck you” to pants!’”

To be produced safely amid the pandemic, the performer who was delivering the eulogy was on one soundstage, speaking “to a house filled with cardboard cutouts of the other performers,” Brosnahan says, while those who were supposed to be in the audience were actually on another stage, in green screen pods, listening through ear pieces and watching the eulogy on a screen in order to react appropriately. A third soundstage was used for the motion-capture moments, such as the opening where they walked in, or when performers walked up or down the aisle to the podium.

This was an idea that came from Done+Dusted, which was brought on-board because its roster of pandemic-produced projects, including the 72nd Annual Primetime Emmy Awards, and made them “the experts in this space that we needed to ensure that not only could we do this but we could do it as safely and innovatively as possible,” Brosnahan says.

“Yearly Departed” was filmed this way, Brosnahan says, because they first started discussing the project in May 2020, when “the situation was looking fairly precarious out in Los Angeles,” and they wanted to be sure they could shoot something in a way “that all of our talent would feel comfortable. For so many people, including me, this was the first time back on a film set in a really scary and uncertain time.”

Bess Kalb executive produces and serves as head writer for the special, which also counts Nathalie Love and Samantha Ressler from We The Women among its executive producing team. “One of the advantages of having so many women involved in front of and behind the camera is that all women, inside and outside of this industry, know what it feels like to be in a situation where you don’t feel like people are looking out for you or you don’t feel taken care of. And so that was such a priority for us in crafting this production,” says Brosnahan.

Mendoza’s leadership was essential for that as well, especially considering the “big trust fall” it took for the performers to deliver their eulogies to a silent room.

“She worked her behind off to make it feel like this sisterhood was at the center of the project, even though we were never all in the room at the same time,” says Brosnahan.

To make them comfortable with these unique production parameters, Mendoza shares that she and Kalb had a Zoom meeting with every performer ahead of filming “to explain the process and what to expect and what we’re going to need in terms of time and what have you so they don’t walk in cold.”

The “Yearly Departed” team had about a week for the special, which is much more time than Mendoza has had on previous variety specials where “normally you go in and shoot two shows back-to-back and that’s it.” In this case, all of the technical elements had to be so thoroughly planned ahead of time that they took a few days just to look at different camera angles and figure out where the locked-off shots would be.

This “was shot more like a film because everything had to be done specifically and separately,” she says. “It was important to have the right height, the right focal length, what was the lens that we used? All those things really come into play when you’re moving between a green screen and a hard, physical set.”

They also made sure to build enough time into the actual shoot days for “three or four takes or a pickup” where needed because “at the end of the day if you don’t have the material it doesn’t matter how fancy the shots were,” Mendoza continues. “It is a comedy special first.”

Mendoza shares that having directed a few episodes of NBC’s remotely-produced sitcom “Connecting” prior to “Yearly Departed” helped with her comfort level working “over the phone and being able to lead virtually.” A normally hands-on director on-set who prefers to stand next to the camera than sit at Video Village, she had already adjusted somewhat to focusing on watching her actors on monitors and communicating with some distance. Where the challenges really lay were in the technical details of that communication, starting with the fact that she was using her personal iPhone 8 to talk to her crew on the other stages and sometimes they simply had trouble hearing her or the line would get knocked out.

Complications aside, “something I’d like folks in all different conditions to take away from it is that nothing is impossible, because looking at this on paper it felt incredibly daunting: where are we going to come up with the time and the money and the equipment?” Brosnahan says. But, “I left this experience feeling incredibly hopeful and creatively fulfilled. To know that something that was challenging and multifaceted as this production could get done and could look great and could capture all of the spirit that we hoped to, to know that it’s possible makes me hopeful for what other creative art can come out of this time and will come out of this time.”