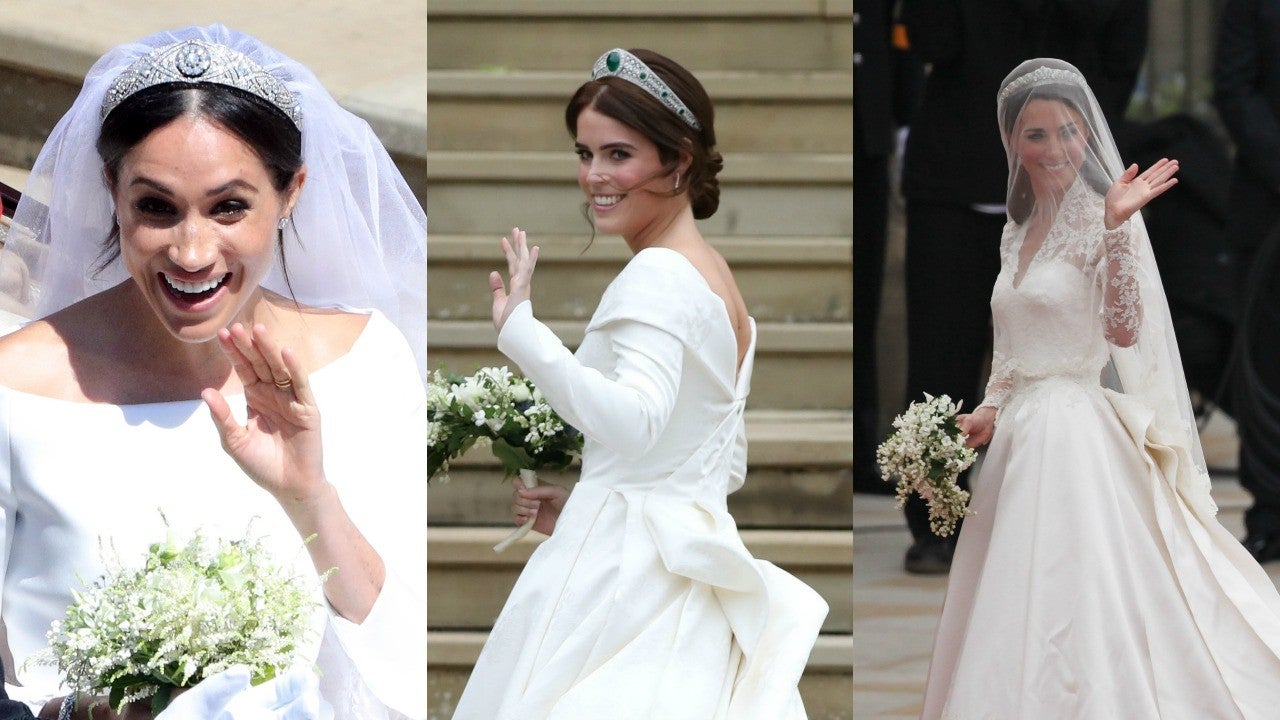 Princess Eugenie has officially joined the ranks as a royal bride!

With her nuptials to Jack Brooksbank, the 28-year-old is in good company with Kate Middleton and Meghan Markle, who joined her extended family in their respective weddings to Prince William and Prince Harry.

Each bride made their own individual mark on their big day, from Eugenie proudly embracing her scars in a gown with a plunging back, to Meghan’s choice of pastor and choir, to Kate’s fairy tale perfection.

But the three also shared a lot of elements in their gorgeous weddings. Here are the multiple things Princess Eugenie shared in common with her fellow royal brides:

Both Eugenie and Kate arrived in style in the same car for their nuptials, rolling up in Queen Elizabeth II’s vintage 1988 Rolls Royce Phantom VI. The car was presented to The Queen in 1978 for her Silver Jubilee by the Society of Motor Manufactuerers and Traders.

Eugenie and Meghan both married in St. George’s Chapel at Windsor Castle, a location that has seen centuries of history, and of course multiple weddings, including the blessing of Prince Charle’s wedding to Camilla Parker Bowles in 2005.

All three brides had famous friends in attendance at their ceremonies. Eugenie welcomed famous faces such as Demi Moore, Liv Tyler, Cara Delevingne, and Naomi Campbell, in addition to her own famous relatives. Meghan had close friend Serena Williams and her husband Alexis Ohanian attend her wedding, along with David and Victoria Beckham, George and Amal Clooney, and Oprah Winfrey. The Beckhams also attended Kate and William’s wedding back in 2011, as well as Elton John and Guy Ritchie. Interestingly, Prince Harry’s ex-girlfriend, Chelsy Davy was in attendance at all three royal weddings!

Kate and Eugenie are close with their sisters, Pippa Middleton and Princess Beatrice, and both served as maids of honor on the big day. Pippa made a splash at Kate’s wedding, where she also wore white (a more common tradition in the UK) and wrangled the young pageboys and bridesmaids. Princess Beatrice also made headlines by reading a passage from The Great Gatsby during the ceremony, a break with tradition requested specifically by Eugenie.

In addition to sisters as maids of honor, all three brides had a bridal party made up of adorable kids, as is tradition in the UK. Prince George and Princess Charlotte, Kate and William’s kids, participated in both Eugenie and Meghan’s weddings this year, almost stealing the show both times.

Eugenie and Meghan also shared two other participants in their weddings — the horses pulling their post-ceremony carriages. All three brides enjoyed a romantic carriage ride following their “I dos,” but only 2018’s royal brides happened to have the same noble steeds take them through the castle grounds with their husbands.

No two (or three) brides have the exact same dress, but Eugenie, Kate, and Meghan all had echoes of each other’s style in their respective looks. Eugenie’s Peter Pilotto and Christopher De Vos gown and Meghan’s Givenchy gown both shared necklines that highlighted their shoulders, and all three sported long sleeves as part of their look.

Hidden in the detailed stitching on each gown were flowers with significance to each bride. Eugenie had a shamrock for her mother, Sarah Ferguson’s, Irish heritage, a thistle to honor Scotland; the York Rose, a nod to her royal lineage, and ivy, which represents the couple’s home.

Meghan took a similar approach, with flowers from all 53 of the commonwealth countries represented on her veil, along with a California poppy to represent her home state, and wintersweet, which grows at her home with Prince Harry.

Kate also had nods to the commonwealth on her gown, including roses, thistle, daffodils, and shamrocks.

What’s a royal bride without a crown? All three women were lucky enough to borrow some jewels from The Queen for the big day. Eugenie wore a diamond and emerald tiara, known as the Boucheron Tiara, made in 1919 and bequeathed to Queen Elizabeth II in 1942.

Meghan’s tiara shared a similar style on her day back in May, the Queen Mary Diamond Bandeau, with a diamond brooch in the center that dates back to 1893.

Kate wore a 1936 Catier halo tiara, originally a gift from George VI for the Queen Mother, and presented to Queen Elizabeth II on her 18th birthday.

For more on Princess Eugenie’s big day, check out the video below!

Princess Eugenie Shows Off Her Back Surgery Scars in Royal Wedding Gown: Pics