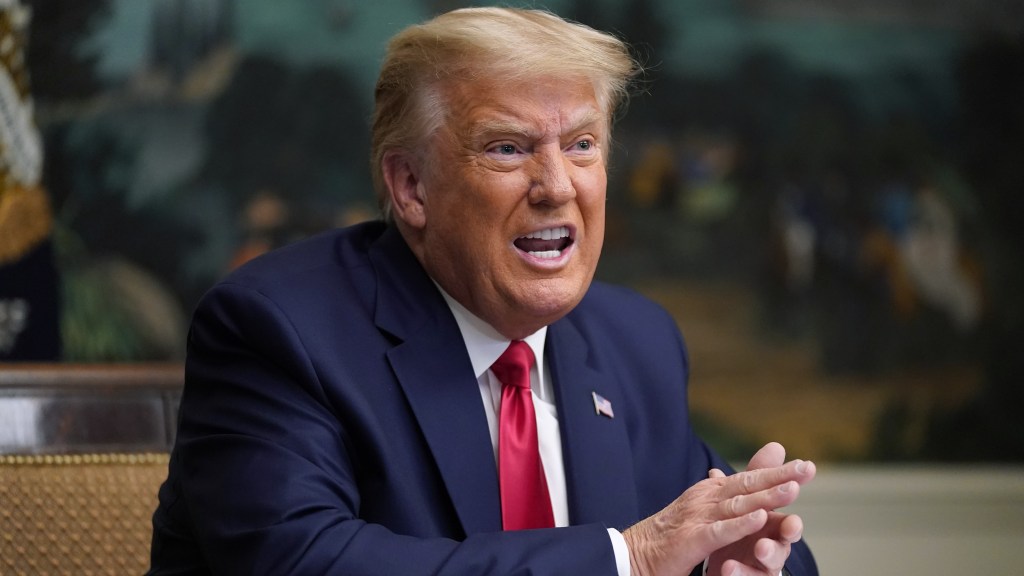 President Trump, upset that Twitter and Facebook have been fact-checking his conspiracy theories alleging widespread fraud in the 2020 election, is attempting to strong-arm Congress into rolling back legal protections for social media companies by threatening to veto a $740 billion defense spending bill.

Trump, with less than two months remaining in office before he’s replaced by president-elect Joe Biden, stepped up his campaign seeking to revoke Section 230 of the Communications Decency Act. The law grants internet companies broad legal protections for content shared on their services and allows companies like Facebook, Twitter and YouTube to moderate content on their services as they see fit.

In posts Tuesday evening on social networks, Trump alleged that Section 230 represents a threat to “National Security & Election Integrity” and said he would veto the National Defense Authorization Act bill unless Section 230 is repealed.

“Section 230, which is a liability shielding gift from the U.S. to ‘Big Tech’ (the only companies in America that have it – corporate welfare!), is a serious threat to our National Security & Election Integrity. Our Country can never be safe & secure if we allow it to stand,” Trump wrote. “Therefore, if the very dangerous & unfair Section 230 is not completely terminated as part of the National Defense Authorization Act (NDAA), I will be forced to unequivocally VETO the Bill when sent to the very beautiful Resolute desk. Take back America NOW. Thank you!”

The NDAA bill, authorizing up to $740 billion in spending on national-security programs in 2021, passed in the Senate and House with veto-proof supermajorities. It’s unclear whether Trump’s threat will change congressional support for the NDAA.

Since Election Day, Twitter has adding warning labels to more than 200 of the president’s tweets and retweets noting that they were “disputed” or misleading. Facebook also has appended fact-checking tags to numerous Trump posts that have falsely asserted voter fraud or other election-malfeasance conspiracy theories; among other things, Facebook’s notices have pointed out that Biden is the projected winner of the 2020 election.

Separately Tuesday, U.S. Attorney General William Barr told the Associated Press that the Justice Department has found no evidence to date of widespread voter fraud that would change the outcome of the 2020 election — contrary to the baseless claims Trump continues to push.

Democrats support reforms to Section 230 but over concerns about the spread of misinformation and hate speech, whereas Republicans have zeroed in on allegations that tech platforms systemically censor conservative viewpoints. Biden has himself called for repealing Section 230 protections for social media platforms, complaining in a January interview with the New York Times that Facebook “is propagating falsehoods they know to be false.”

Trump issued an executive order in May seeking to rescind Section 230 protections for social networks if they “engage in censoring or any political conduct.” Critics have argued that the move violates private companies’ First Amendment rights. Trump-appointed FCC Chairman Ajit Pai, who is exiting the commission on Jan. 20, in October asserted that the telecom agency has the legal authority to regulate social-media companies in initiating a rulemaking to “clarify” how Section 230 applies to social media firms.

In October, Twitter gave GOP critics new ammunition to train fire on Section 230 after the social network, citing its “hacked materials” policy, blocked users from sharing the New York Post’s unconfirmed articles about Hunter Biden alleging he cut his father in on lucrative deals in China and Ukraine. Twitter chief Jack Dorsey admitted that blocking the URL to the Post pieces without context was wrong, and the company ultimately changed its policies to allow the links to be shared on Twitter.