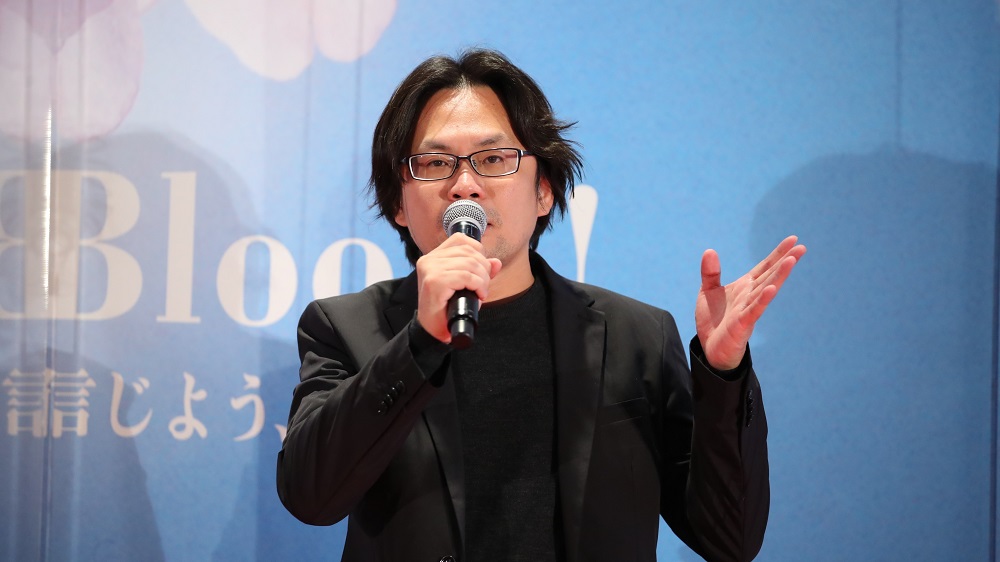 Stars, directors and other local film folk turned out in impressive numbers on Saturday afternoon for the opening ceremony of the Tokyo International Film Festival. The glitzy red carpet was replaced with a series of more static photo ops on a stage in central Tokyo, with plexiglass partitions keeping the talent separated.

The festival has had to re-write most of its activities this year due to the impact of the coronavirus – the selection has shrunk to just 32 features in the new Tokyo Premiere section, which has replaced the competition and two other sections.

Also, the only Tokyo Premiere prize to be given is an audience award – but the simple fact that the festival is still going ahead in physical form is typical of a Japanese doggedness and determination to push on through adversity to get things done.

Even the opening film, a boxing picture by Take Masaharu, spoke to that theme. Its title: “Underdog.”

The opening ceremony at the International Forum in Yurakucho was dressy but cautious. The Film Score Philharmonic Orchestra, minus masks, opened the proceedings with a “Star Wars” themed concert piece.

Audience members let their guard slip and mingled closely. But mask wearing in the seats was nearly universal. One government minister turned up in person, but another socially distanced himself and sent a video message instead.

With Japan’s borders still largely closed there were almost no foreign faces to be seen on stage or in the audience. Though there were video greetings from the Cannes Festival’s Thierry Fremaux, Thailand’s art house darling Apichatpong Weerasethakul, “Tenet” director Christopher Nolan and Robert De Niro, who spoke for all 10 seconds, with a greeting in Japanese.

“We honestly wondered if we would be able to hold this edition of the festival as a live event,” confessed festival chairman Ando Hiroyasu. “We are very thankful that we could hold this opening. We must believe in the power of films and the future of films.”

While the wattage may be dialed down, that power will get turned on through the week at in-person screenings. These will take place mostly at regular festival venue, the Toho Cinemas complex in the Roppongi district, and a handful of other sites for selected shows.

“The audience has a very important role to play this year,” said festival ambassador Yakusho Koji, referring to the difficulty of bringing in foreign journalists and jury members.

The Tokyo festival, which is also cooperating with its sometime rival Filmex, has still rustled up a diversity of films from around the world by directors at all stages of their careers. In the Tokyo Premiere section they include 25 world premieres 7 Asian premieres.

Among the film personalities gracing the stage on Saturday were the cast of the opening film “Underdog,” though star Moriyama Mirai opted for a virtual presence; Tamura Kotaro, director of the animated “Josee, The Tiger and the Fish”; “Food Luck” director Terakado Jimon and star Tsuchiya Tao; and Hashimoto Hashima, director of the festival’s closing film “Hokusai.”

After taking a massive hit to its bottom line in April and May, when theaters across the country were shut down, the Japanese industry began to revive in the summer months. To date seven films released since the start of the corona crisis have crossed the JPY2 billion (approximately $20 million) milestone at the box office.

The biggest by far is the local animation “Demon Slayer,” which soared to JPY10 billion or nearly $100 million in just ten days following its opening on 403 screens on Oct. 16. The film is now expected to finish with $200 million or even $250 million.

One reason for such splendiferous numbers in the midst of a pandemic that Japanese theaters relaxed their seating rules on Sept. 19, allowing multiplexes to pack in patrons shoulder to shoulder instead of keeping them at least one seat apart. They also turned over nearly all their screens to “Demon Slayer,” showing it 40 or more times a day.

But one film can’t save a generally terrible year for the industry. Concessions sales – a major profits center – are down nearly 50 percent for the year since patrons cannot bring their drinks and popcorn into the theater. (Some corona precautions still remain.)

Also, overall box office, which in July and August was 30-40% of the same period the previous year, is expected to fall to half of the 2019 total for January-September.

Meanwhile, production has picked up with the industry rushing to restart a backlog of projects, but the releases of some major Japanese films, as well as much of the Hollywood slate, have been delayed to 2021. Like the heroes of the TIFF opening film, the boxing epic “Underdog,” the Japanese film business is still fighting an uphill battle to success.