‘The Bachelorette’ Recap: Tayshia Adams Starts Her Search for Love 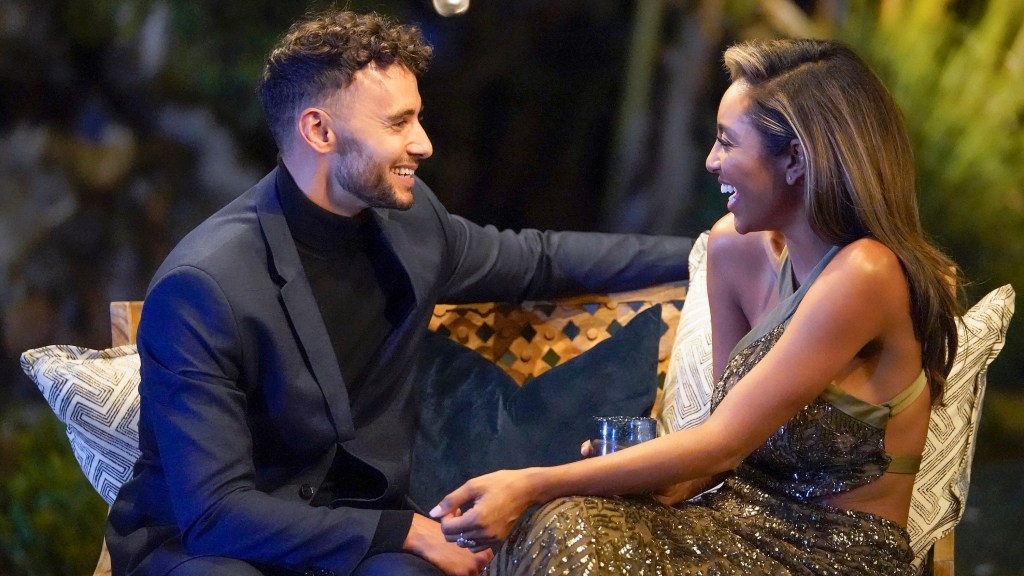 SPOILER ALERT: Do not read if you have not yet watched the Nov. 10 episode of “The Bachelorette.”

Tayshia Adams has been ushered in as ABC’s new Bachelorette. After replacing Clare Crawley during last week’s episode, Tayshia started her journey as the new Season 16 lead.

During a season of unconventional paths, her first night started traditionally as she took the time to meet each of the men. She started making quick connections before host Chris Harrison pulled her aside to introduce her to new contestants. Four more men joined the group with their own limo entrances: Spencer Robertson, Montel Hill, Peter Giannikopoulos and Noah Erb.

While Spencer’s first impression with the other men was less than impressive, he immediately charmed the Bachelorette and she rewarded him with the first impression rose. It gave him immunity for the impending rose ceremony, but she canceled that in order to give all of the men another week.

Before the first dates kicked off, Harrison interjected for a post-Bachelorette interview with Clare and her new fiancé Dale Moss. They talked about their love at first sight romance and stayed strong in their convictions that they did not have contact before the first night.

“I’m so happy,” Clare said. “How he makes me feel is literally like sunbeams out of my heart into the world.”

They teased their future, with Clare even giggling about “babies” while Dale ignored the comment, and concluded with sentiments of gratitude.

Meanwhile back at the resort, 10 of the men joined Tayshia for the first date of her season. They started with a fun-spirited pool party before the date turned competitive and the men divided into two teams for Splash Ball. The game got physical, as tension from the first night carried over into the pool. Spencer ended the game with a split lip, but also with the win, earning extra time with Tayshia.

During the afterparty, the men confronted Spencer. “To try and put it in layman’s terms — and don’t take this the wrong way — you kind of come off like a d—-,” Kenny Braasch told him.

“You were stirring it [the pot] a little bit,” Zac Clark added.

While Spencer denied trying to cause problems, the men continued to pile on. Despite the conflict, he managed to have a productive conversation with Tayshia. Uzoma “Eazy” Nwachukwu joined Spencer as the second man with elimination immunity, as he was given the group date rose.

“I’m starting to actually make connections with these guys, and it was a fear of mine that I wasn’t going to,” Tayshia said. “I was scared that these guys could still be emotionally hung up still on Clare. It feels good that all of them truly want to be here and are here for me.”

But her reflection was immediately followed by Jason Foster’s own confession that he was indeed still hung up on Clare, and didn’t think it could continue on in the journey. “You deserve someone amazing, and you deserve someone who is all in,” he told her. He self-eliminated during an emotional goodbye.

“I’ve been on such a high that I didn’t even realize that some of the guys might view me as a second choice,” Tayshia responded.

The next day, Brendan Morais received the first one-on-one, where he and Tayshia took horses around the resort to stations of snacks served by Harrison. “Round me up cowboy because I am ready to go home with this man. I’m telling you right now — Brendan is everything,” she said.

Their relationship continued to develop over dinner, where they both shared their own experiences with divorce. Brendan married his high school sweetheart in his early 20s, and Tayshia saw infidelity in her first marriage. “It was really therapeutic to hear him saying all of the words out of my heart that I’ve felt the last two years,” she said. “I felt like I wasn’t alone.”

The evening ended with fireworks and a rose, as Brandon became the third man to be protected from elimination.

“The Bachelorette” airs Tuesdays at 8 p.m. on ABC.