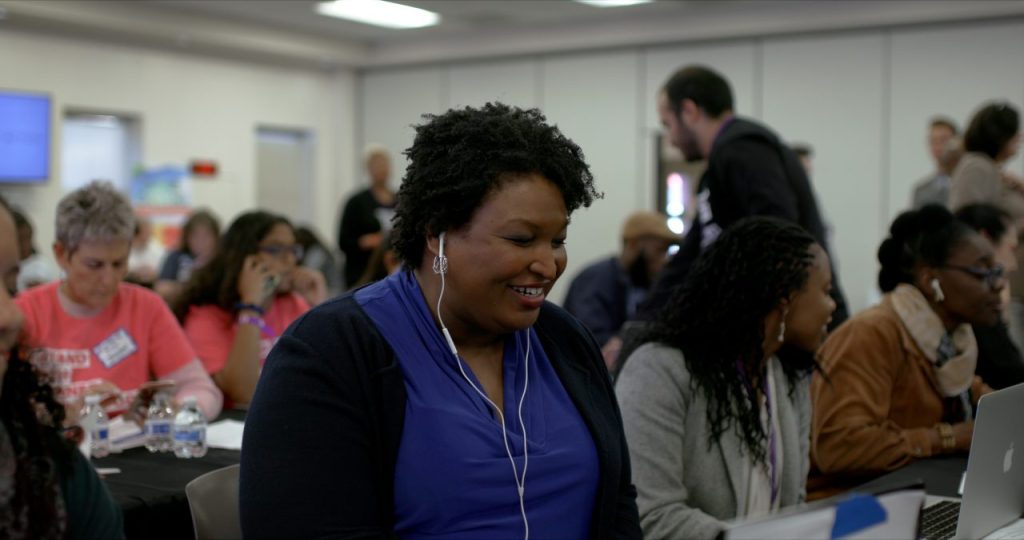 When Hillary Clinton tweeted, “And thank YOU, Stacey. Thank you” on the morning of Nov. 6, she was referring to Stacey Abrams, the former Georgia gubernatorial candidate who turned her attention to voter access after the 2018 election.

Alexandria Ocasio-Cortez, national security adviser Susan Rice and actress Viola Davis were among the many that thanked Abrams for her dedication to grassroots activism over the course of the election. Abrams’ work helped turn Georgia blue, which led President-elect Biden to win the state and ultimately the presidency.

Abrams’ rise to become one of the influential figures of the 2020 election was chronicled in two documentaries that helped galvanize voters.

Director Lisa Cortes, who co-directed with Liz Garbus the Amazon Prime Video documentary on Abrams, “All in The Fight for Democracy,” said, “Liz Garbus and I had the honor of working with Stacey Abrams and saw firsthand the dedication of Stacey and her Fair Fight team for voter access alongside the work of other grassroots organizations in Georgia.”

Cortes added, “I believe that the transformational change we saw in Georgia is in large part due to the culmination of historic efforts by Black women to be seen — and heard.”

Abrams gained national attention in 2018 after Republican Secretary of State Brian Kemp narrowly beat her in the race for governor, with less than 55,000 votes between them. “This is not a speech of concession. Concession means to acknowledge an action is right, true or proper,” Abrams said at the time amid allegations of voter suppression.

Since that race, Abrams fought tirelessly to campaign against voter suppression in the run-up to the 2020 election race, spearheading Fair Fight, and making sure that everyone who had the right to vote, did so.

It worked: It is said Abrams inspired over 800,000 new voters to register through her campaigning.

Abrams urged voters not just in Georgia, but around the country, to vote by mail. She encouraged voters to make a plan.

Speaking with Variety early in the election season, Abrams said, “There is a lot of misinformation coming from inside the country and outside. Some folks want you to not vote. Just because we hear something that sounds chaotic or something can be distracting, it doesn’t change the fundamentals, and that is by Nov. 3, if you’re legally eligible, you should cast your ballot.”

Garbus compared Abrams to Rosa Parks, saying, “After her 2018 campaign, rather than seeking another office for herself, she decided to focus on a broken system. She knew there were hundreds of thousands of voters out there who did not feel they had a stake in the process, that their votes didn’t matter, that their voices were never going to be heard. But she, and the incredible organizers at Fair Fight and the New Georgia Project, knocked on those doors, engaged them for the first time, gave them a feeling they had something to vote for. It is the most deeply patriotic act I can imagine –and a game-changer in American politics.”

Filmmaker Robert Greenwald, whose documentary short, “Suppressed: The Fight to Vote” also looked at voter suppression in Georgia, said of Abrams, “Stacy is a glorious combination of whip-smart, inspirational speaker, and integrity off the charts.”

Abrams appeared on “The Late Show With Stephen Colbert” on Monday night to talk about her efforts and Biden’s win. Abrams said it was Wednesday morning, the day after Election night, when she realized the numbers coming in from remaining counties were looking favorable. Abrams told Colbert, she had been texting with Fair Fight Action CEO Lauren Groh-Wargo and had told her, “This is the first time I’ve woken up in November, without curling into the fetal position first.” Abrams added, “The numbers got bigger and bigger and we got happier and happier.”

Colbert talked to Abrams about Kemp’s efforts at voter suppression, and noted, “I imagine that must have given you even more energy for this effort than before,” to which Abrams replied, “He was a galvanizing force for the intensity of my efforts this time, yes.”

The late night host also pointed out the media stories that posed questions to readers asking, “The Democrats won — but did they really win?” Abrams answered, “Yeah, we really won. There is an orange menace of putrescence that will no longer be able to occupy the White House.”

Greenwald says Abrams is a hero, but he’s aware it took a village.  Those women included Helen Butler, Nse Ufot, Deborah Scott and Tamieka Atkins who helped. “She is not alone — there are so many others, unsung heroes who are fighting tooth and nail for the real values of our country.”

Adds Cortes, “For everyone who was a catalyst for change, we give you your flowers now.”

Thandie Newton, Whoopi Goldberg and Mary Trump also commended Abrams for helping change the face of politics in Georgia through her fighting.

Whatever happens, @staceyabrams is a hero.

She is one of THE heroes of the US election #StaceyAbrams 🙏🏾🤎🙏🏾🤎 https://t.co/bGAlWJQlj5

@staceyabrams This is also your win. Thank you for everything you do and continue to do. I am honored to know you. You helped change the conversation

Georgia is rich with grassroots leadership, committed advocates, and dedicated organizations — all fighting to overcome the long legacy of voter suppression. Thank you @staceyabrams! https://t.co/hOMXNl8P4I