‘Spell’ Review: A Conventional Hexing Horror in the Hills of Kentucky 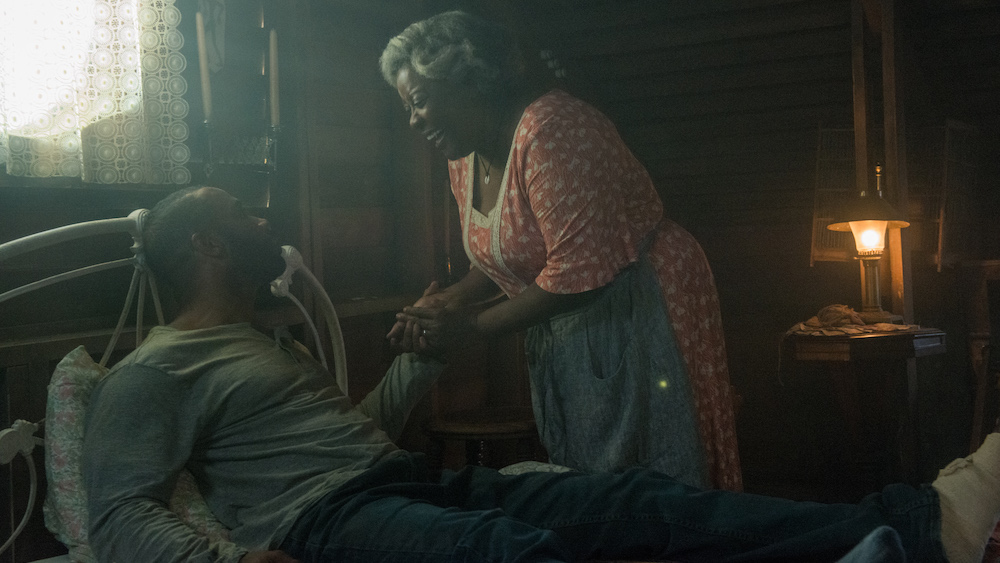 “Spell” adds to the significant recent growth of African American horror cinema, though really only in casting terms. Otherwise, this reasonably suspenseful if implausible tale is just another variation on the familiar formula of “city folk” making a big mistake going to the country, where every primitive peril awaits them. Here, instead of homicidal hillbillies à la “Texas Chainsaw” and “The Hills Have Eyes,” it’s an Appalachian enclave of Black hoodoo practitioners, with upwardly mobile Omari Hardwick at the “Misery”-esque mercy of witchy Loretta Devine.

Shot in South Africa, British-Zimbabwean director Mark Tonderai and veteran Hollywood scribe Kurt Wimmer’s film isn’t aiming for regional authenticity, though it might have poured on the bad-dream atmospherics a bit thicker to make up for that lack. Nonetheless, this is a decently stylish thriller with occult elements that should satisfy viewers’ genre requirements, though few will demand a second watch (or sequel). Paramount is releasing it to VOD, digital and available theaters the day before Halloween.

Having fled a violently abusive backwoods upbringing (glimpsed in black-and-white flashbacks) a quarter-century before, Marquis (Hardwick) is now a very bougie success story as a corporate lawyer, his office and home both gleaming monuments to expensive sterility. When he’s informed that the brutal father he’s long estranged from has died, wife Veora (Lorraine Burroughs) insists she and their teenage children (Kalifa Burton, Hannah Gonera) go with him to the funeral. The jaded, bratty kids are unenthused, but perhaps this rural sojourn will be good for them, as mom fears they’re already “turning out to be entitled jerks.”

Marquis is conveniently a “straight-up bush pilot,” so he actually flies them himself in a private plane to remote Cypress Ridge. But a storm impairs their final approach, such that he wakes up alone in a farmhouse attic, tended by locals who claim no one else was found at the scene of the crash. There’s the alternately folksy and stern Eloise (Devine), who’s clearly in charge here, and her more doddering spouse Earl (John Beasley). Should Marquis get out of hand, they’ve got younger helpmate Lewis (Steve Mululu), who’s mute but all muscle.

In any case, their visitor is badly banged up, with an apparent broken foot. His rest is rather heavy-handedly encouraged, including via locked door. He soon rightly suspects his hosts’ intent as malevolent, not just from their stonewalling of his frantic questions or umbrage at his “uppity” manner, but from Eloise’s open reliance on Boogity, a “kind of folk magic.” One covert outing through a window across the farmstead’s roofs reveals that these people preside over a whole congregation of hoodoo worshippers who sacrifice animals in faith-healing rituals. It is not just paranoia on our hero’s part to fear he might be the next thing slated for sacrifice.

Writer-producer Wimmer, who over the last three decades has mixed variable originals (directorial projects “Ultraviolet” and “Equilibrium”), adaptations (“Street Kings,” “Sphere”) and remakes (“Point Break,” “Total Recall”), has the bones of an idiosyncratic supernatural tale here. But “Spell” is a bit too busily paced to maximize the eccentricity of its characters or setting, leaving the script to play out in taut but formulaic fashion.

Among the things that don’t quite coalesce into an otherworldly whole are the gulf between the lead performances: Hardwick successfully makes Marquis’ panic and physical pain the story’s engine in a mode of dead-serious naturalism, while Devine’s theatrical gorgon flirts with comedic caricature. (And no wonder, given lines like “I know ya got that old-time slave magic in ya!”) The film could’ve used either a bit more humor and fantastical fillips throughout to paper over its credibility gaps, or a scarier villainess to, well, be scarier. As it plays out, “Spell” has scattered tense moments, but the only truly frightening thing here is Marquis discovering the graphically nasty truth of what’s really wrong with his foot.

Still, Tonderai (who’s logged much TV work since his prior features, the excellent 2008 thriller “Hush” and middling 2012 one “House at the End of the Street” with Jennifer Lawrence), keeps things on a solidly diverting if unmemorable plane. Paula Loos’ rustic-time-warp production design and the hot lighting coloration of Jacques Jouffret’s cinematography contribute to an attractive overall aesthetic. Editor Sarah C. Reeves and Ben Onono’s original score add more conventionally propulsive but effective elements.

It all comes to a fairly satisfying head, even if one wishes everybody concerned had resisted the seeming obligation to tack on one of those rote “But … the terror continues!” end-notes that by now reliably elicit audience snorts.