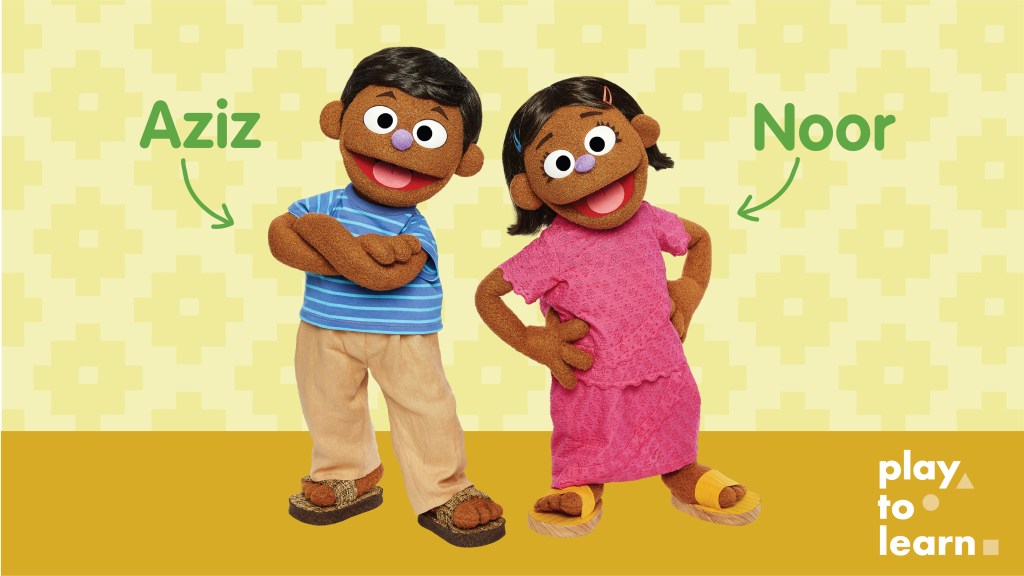 Forget the Oscars. One of the sites where the battle for on-screen representation matters most may be in Cox’s Bazar, Bangladesh — the world’s largest refugee camp.

Two new inhabitants are set to take up residence there in the new year: six-year-old Rohingya Muslim twins Noor and Aziz. The difference between them and the one million-plus Rohingya who have fled ethnic violence in neighboring Myanmar? Noor and Aziz are muppets, developed by the non-profit “Sesame Street” TV show creator Sesame Workshop.

The organization, which has a presence in over 150 countries, created the new characters to help children in Cox’s Bazar build key early childhood skills through relatable educational content, which will feature them speaking in Rohingya.

“To help children feel less alone because they can identify with characters is a really powerful way to help them recover and start rebuilding the resilience that they so deserve,” Sherrie Westin, Sesame Workshop’s president of social impact, tells Variety. “To create content in which learning is joyful, playful and actively engaging is one of the most important things we can do to help mitigate the negative effects of trauma they’ve experienced.”

She explained that Rohingya children have very little content available to them at all, and have never seen themselves depicted in media. “For most, this will be the first time that they can truly identify with the characters they’re seeing in storybooks and on screen.”

Sesame tested everything from the girl twin Noor and her brother Aziz’s haircuts to their slip-on sandals for how well each element resonated with local kids, a process that took about a year from conception to completion. The two muppets were conceived as twins so that they could be of opposite sexes but still play together in a culturally appropriate manner, all while modeling “very clear gender equity” in a culture where girls tend to take on more caregiving and household work.

At age six, the twins are old enough to problem solve independently but still engage naturally with caregivers. Sesame plans to reflect the fact that many Rohingya children do not live with their biological parents by including Elmo’s parents as aunt- and uncle-type figures.

Storylines are being designed to help kids work through past trauma, including plots about how Noor is afraid of loud noises and Aziz is afraid of the dark. “We want to build resilience skills, and this allows us to show the ways that they support and reassure one another when one is stressed,” Westin says.

Despite a huge body of research on the general importance of early childhood education, there remains a significant gap in knowledge around what types of intervention work in humanitarian contexts for children like the Rohingya, who are on the move or displaced, and may be for many years to come.

“We don’t really know what works for children in such settings,” admits Anita Anastacio, head of the Play to Learn Initiative at the LEGO Foundation, a key funder of the Bangladesh project. She estimates that about half of refugees in Cox’s Bazar are children under the age of 18 and a quarter are below the age of six.

Humanitarian aid has historically focused on children’s survival — health and nutrition — rather than their ability to thrive and develop key cognitive skills, meaning that there were, until recently, few interventions available even to study. Observing families that are frequently on the move also made it difficult to conduct rigorous research. (Indeed, the Bangladeshi government has this month begun relocating thousands of Rohingya from Cox’s Bazar to a nearby low-lying island in a controversial attempt to ease overcrowding.)

Despite the challenges, LEGO is “investing heavily [in Sesame], so as to research, test and better document interventions,” notes Anastacio.

“Media content is more crucial than ever. The question is how to make it playful, culturally relevant, and add that component of designing stories where you don’t just see kids playing, but playing as they learn numbers, interact and problem solve,” she explains.

Sesame’s content will be integrated into existing early learning centers run in partnership with relief organizations BRAC and the International Rescue Committee — colorful tents set up at Cox’s Bazar where volunteers offer post-natal care and other group sessions to help children grow mentally, socially and creatively.

The pandemic, however, has made such in-person outreach strategies impossible, posing the question of how best to distribute newly developed content in the months to come. Unlike populations in other crisis areas like the Middle East, few Rohingya have access to TV. The Bangladeshi government also restricts access to mobile phones and internet for those in the camps, although it has eased its policies slightly under international pressure during the pandemic.

With public community screenings also currently a no-go, the Play to Learn Initiative team is preparing printed materials to pair with video content, and testing out what can be done via radio.

The goal is to create models that are adaptable and replicable for children in other crisis settings around the world.

“We’ll literally trying to double the existing research with the research we’re conducting now, and it will be shared, because we want others to learn from our mistakes,” says Westin. “When kids have experienced trauma, it’s a huge detriment to their long-term outcomes if we don’t intervene in the early years. This is all a part of trying to transform humanitarian response to make sure the youngest aren’t left behind.”

Check out a video of the Play to Learn program in action below: