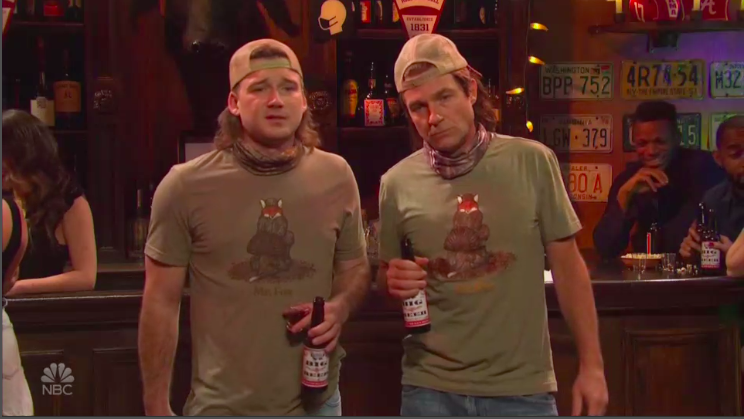 Country artist Morgan Wallen appeared as the musical guest on the Dec. 5 episode of NBC “Saturday Night Live” after being pulled from the show earlier in the fall due to breaking health and safety protocols amid the COVID-19 pandemic, an event Wallen and the late-night sketch comedy series itself had some fun with during his appearance.

Wallen stepped on stage in Studio 8H to also portray himself in a sketch that saw him enter a bar at the University of Alabama, holding a beer and with his face covering around his neck. “To no consequences!” he yelled with his beer raised high above his head on entry.

Chloe Fineman portrayed a fan who asked him if they could kiss and she could film it, but noted she would only post it on Tik Tok. This was, of course, the proof the show’s personnel had that he was not taking protocols seriously back in October that led him to not being able to perform on the Oct. 10 episode as originally planned. But as they were kissing, guest host Jason Bateman as “future Morgan” ran through the bar doors in a haze of “time travel smoke” to warn Wallen that the video was going to get out, despite him asking the young woman not to do such a thing.

“I thought it was an air-tight approach as well,” Bateman’s Wallen said.

The real Wallen was cavalier, saying executive producer Lorne Michaels would never kick him off the show for such a thing, to which Bateman’s Wallen responded, “No of course Lorne wouldn’t ’cause he ain’t no puss; he’s a damn man; he’s got balls the size of Toyotas. But the execs at NBC, they’re going to force his hand, bro.”

The real Wallen then showed some remorse, saying he wouldn’t want to let his fans down and asked Bateman’s Wallen what happens with COVID in the future.

“I don’t know, I’m only from one month in the future,” he said. “You partied so hard, this is what you look like after a month.”

Bowen Yang came in as Wallen from two months in the future, which is where we are now from the events of the bar. “I came to warn you to leave this party immediately,” he said to the real Wallen. “And you,” he continued, turning to Bateman’s Wallen,” I came to warn you about the experimental skin regimen you’re going to try out. It might make you too hot.”

Pete Davidson also appeared in the sketch as a guy in the bar who happened to be dressed like the multiple versions of Wallens and who did enter through a cloud of smoke — “but it was weed,” he said. He reassured Wallen that things with “SNL” would be OK because “there aren’t too many people willing to fly to New York right now.”

The real Wallen in the sketch said he was inspired to write a new song, “Focus on the Future,” and he began singing it right then and there: “It’s hard to focus on the future / when the present’s full of girls / If all you do is kiss all day / then you’ll miss out on the world / So let’s all raise a glass up / and I thank you in advance / for giving this poor Southern boy a second yankee chance.”

As the musical guest in the Dec. 5 episode, Wallen also performed two of his songs: “7 Summers” and “Still Goin Down.”

Watch the sketch above.