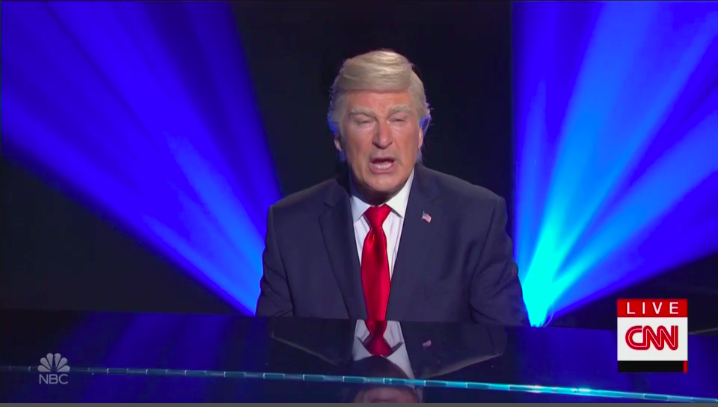 Election Day turned into Election Week for the 2020 presidential election, but just a few hours before the show went live, President-Elect Joe Biden and Vice President-Elect Kamala Harris took the stage in Wilmington, Del. to deliver their first speeches since the 2020 presidential election was called in their favor. Naturally, the writers at “Saturday Night Live” were poised and ready for this moment, using it for the Nov. 7 post-election cold open sketch.

“I know I’m supposed to be a neutral news anchor, but god damn it, that feels good,” Beck Bennett as Wolf Blitzer exclaimed at the start of the sketch, which you can watch above.

It then cut to Jim Carrey as Biden walking behind a podium to address the nation. “We did it. Can you believe it? I actually kind of can’t. It’s been so long since something good happened,” he said, comparing the “edging closer and closer” of finally being announced as the president-elect to “having sex with Sting: What a release, man.”

In the real Biden’s speech, he called for unity among the country, and both he and Harris promised to rebuild the “soul” of America, as well as to make the country one that would be respected worldwide again. Carrey played on this, as well, noting whether or not you voted for him, he was going to “be a president for all Americans — whether you’re from a liberal state like California or a conservative state like Oklahoma or a cracked out mess like Florida.”

Maya Rudolph as Harris noted all of the firsts she was achieving, including being the first female, the first Black and the first biracial vice president. “If any of that terrifies you, I don’t give a funt,” she said. Referencing her Jewish husband Douglas Emhoff who would now be the first gentleman, she noted that they “check more boxes than a disqualified ballot.”

She addressed the little Black girls watching, telling them that the reason their moms were laughing and crying was because they’re drunk. “Your mom is going to switch from laughing to crying to dancing pretty much all night,” she said.

Together the two “humbly” accepted the victory, with Carrey’s Biden saying they weren’t going to gloat, but Rudolph’s Harris saying, “Maybe a tiny bit.” She then played, “You About To Lose Your Job” and the duo danced for a few seconds before Bennett’s Blitzer pointed out that the people watching at home also want to “see the president sad.”

Cutting to Alec Baldwin as Donald Trump for a concession speech that in reality never happened, Baldwin’s Trump delivered lie after lie, starting with the claim that he was actually re-elected but “they’re trying to steal the election away from me.” He chanted, “Stop the count” until he was off-screen told he was behind, and then he began to chant, “Count every vote.”

He also claimed there was a red wave, but the map that Chloe Fineman’s Kayleigh McEnany brought out to support that claim actually said “COVID-19 cases” on top. Wanting to “remind” everyone who he really was, he then sat down at a piano and sang a slowed down version of “Macho Man.”

Biden won the presidential race with 290 electoral votes to Donald Trump’s 214. He also won the popular vote with more than 75 million ballots tallied in his favor.

Normally, “Saturday Night Live” airs live coast-to-coast on Saturdays at 11:30 p.m. ET / 8:30 p.m. PT on NBC. However, this special episode started almost a half and hour late, as the network opted to let a college football game (Clemson vs. Notre Dame) finish in double overtime first and still run some of the local news before beginning “SNL.”

Later in the episode during the “Weekend Update” segment, Colin Jost and Michael Che commented on the day’s events, as well, first showing real news footage of celebrations from New York City to Paris, France and pointing out that the only candidate to concede so far has been Kanye West, which is “never a good sign when Kanye accepts reality faster than you do,” said Jost. Che, on the other hand, compared the Biden-Harris victory to the scene in “The Shawshank Redemption” when the prisoners were drinking beer on the roof: They were still in jail, but for a moment things were OK and for Che, the issues he was worried about before momentarily faded.

Jost also said that the most important part about Trump losing the election is that soon we will never have to listen to him again. “We might want to,” he said, “just like we might want to slow down to get a better look at a burning car, but we don’t have to. Before Trump was president, no one ever cared what he said. No one was ever like, ‘I wonder what the least successful real estate developer in New York thinks about this?’ In three months, Trump will just be another guy yelling conspiracy theories in the background and then we can treat him like this reporter did today with the crazy dude in the background.” The show then cut to Alex Zdan telling a Trump supporter to “f— off” live on Long Island, N.Y.’s News 12.

Kate McKinnon stopped by “Weekend Update” to reprise her role as Rudy Giuliani, claiming it was not a mistake that the day’s earlier press conference was at the Four Seasons Landscaping company instead of a Four Seasons hotel. But she did say she was glad she made it to Studio 8H in 30 Rockefeller Plaza because she first went to “30 Rocks, a granite quarry.”

Addressing Trump’s recent legal claims about the election, McKinnon’s Giuliani said the first step was throwing out bogus mail-in ballots: “Colin, these ballots, they could be coming from Mars.” They’re also demanding a recount in Michigan and “in Wisconsin we have demanded a de-count,” she said. “We called backsies in Nevada, we’ve got safety in Arizona, and in Georgia, opposite day. Plus we’re going to demand that I do the recount personally and our silver bullet is, I can’t count very high.” The plan is also to sue the states, she said, but for what? “Child support? I don’t know.”

“SNL” also tackled Trump’s potential legal woes as a private citizen in a sketch that saw guest host Dave Chappelle and cast member Ego Nwodim as news anchors whose broadcast was interrupted by “live” footage of Trump fleeing the White House in a white Ford Bronco. Mikey Day as Don Jr.’s audio was used over real footage of O.J. Simpson’s 1990s police pursuit, culminating with a threat for Trump to run again in 2024.