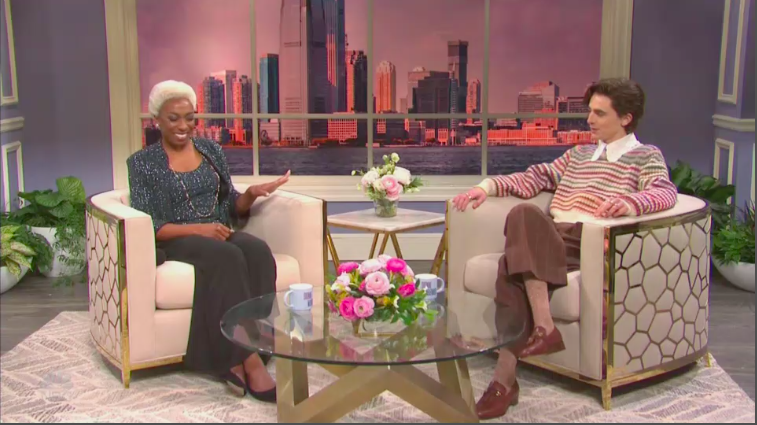 The legendary singer Dionne Warwick tweeted, “Kenan Thompson has been on SNL for as long as I’ve been alive. A very talented and funny young man” in the early evening on Dec. 12, which seemed like foreshadowing that she would turn up on that night’s episode of the NBC late-night sketch comedy series. And that she did, in the form of cast member Ego Nwodim portraying her for a “Dionne Warwick Talk Show” sketch.

The premise of the sketch was that Warwick’s talk show followed in the vein of her tweets: online she has posed such questions as “Hi, @chancetherapper. If you are very obviously a rapper why did you put it in your stage name?” Meanwhile, in the talk show sketch she asked questions that ranged from “Who are you?” and “Where would I know you from?” to Harry Styles (played by guest host Timothée Chalamet, to “You look spooky, can you put a hex on Wendy Williams for me?” to Billie Eilish (Melissa Villaseñor).

Warwick and Williams’ recent feud took a lot of sketch real estate, as she also asked her guest Timothée Chalamet (played by Chloe Fineman) to unlock her phone to send a “clapback” to Williams, who in, real life, had used Warwick’s past arrest and tweets as material for her own talk show earlier in the week.

At the end of the sketch, Nwodim’s Warwick told her audience to check under their seats, but there was nothing there because, “I don’t owe you anything.”

Nwodim is not the only “SNL” player to have portrayed Warwick: former cast member and this season’s guest star Maya Rudolph stepped into the songstress’ glittery gown for an episode of Tina Fey and Robert Carlock’s “Unbreakable Kimmy Schmidt.”