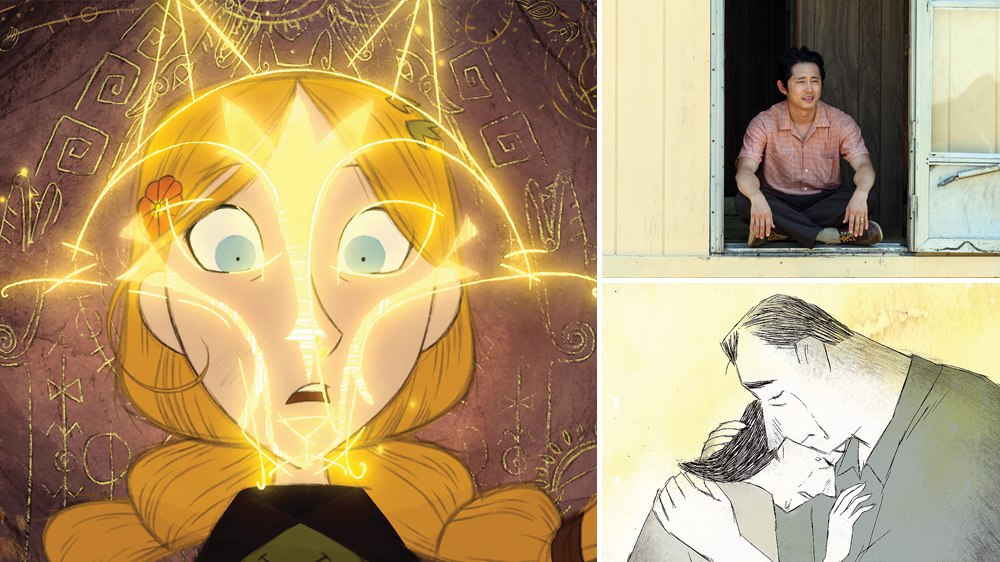 It takes a village to make a motion picture come to life, with different departments and talents working together. We spoke to some of the artists who collaborated on films about how they enhance each other’s contributions and serve a filmmaker’s overall vision.

“Over the Moon”(Netflix)
Songwriters: Christopher Curtis, Marjorie Duffield, Helen Park
Music is the crutch of the success of Glen Keane’s magically moving “Over the Moon.” Alongside producer Peilin Chou, the two worked closely with songwriters Christopher Curtis, Marjorie Duffield and Helen Park. Wanting to honor the script by the late Audrey Wells was of the utmost importance. Each writer would take turns taking the lead on a song. Curtis and Duffield were already a writing team, but when Park arrived at Curtis’ apartment during a January snowstorm without a coat, the three became a family. After Curtis loaned his coat, the trio worked passionately, doing their due diligence. When they received the news about Wells’ death, the three were in the studio with star Philippa Soo recording “Ultraluminary.” The trio say, “That song, in many ways, had always been for Audrey.”

“If Anything Happens I Love You” (Netflix)
Animator: Haein Michelle Heo, Animation Director: Youngran Nho
Shorts are too often overshadowed by features, but the medium presents some of the brightest and most exciting artists coming up in the industry. Since she was a child, Korean-born Youngran Nho had drawn cartoons and shared them with friends. Collaborating with animator Haein Michelle Heo, whom she brought on as an animator when the studio was in production, she says, it “was so organic and seamless.” Nho and Heo would decide on scenes to design on and animate first, working from different locations. “I animated a lot of the film in coffee shops and my house,” says Nho. The entire team stayed in contact via Slack, critiquing and confirming each other’s work in real time.

Also from South Korea, Heo just graduated from California Institute of the Arts. Every week, with Nho and directors Will McCormack and Michael Govier would get together and, with dessert in hand, discuss the steps needed to create the film.

Favorite Moments
Nho: “It is hard to pick one favorite moment in the film, but I would say the ending scene, when the two parents finally embrace their grief and hold each other crying on the bed is the best moment for me. It was such a touching moment. I watched some reference videos about parents who lost their child when I animated the scene to capture the emotions into the characters. When the daughter’s light showed up in-between while the parent’s shadows hugged on the wall, that made me feel so warm and loving.”
Heo: “I love the scene where the family dines out at the Italian restaurant, and the daughter pops out from under the table. She looks so cute and funny there, it is very satisfying to watch her eat a huge plate of spaghetti. I believe it is one of the most beautiful scenes in the film, accompanied by really beautiful music.”

“Wolfwalkers” (Apple TV Plus/GKids)
Co-Director: Ross Stewart, Animator: Emmanuel Asquier-Brassart
The energy and passion that exudes from “Wolfwalkers” is one that GKids has exhibited for years. French-born Emmanuel Asquier-Brassart studied animation at Gobelins and did two internships at Cartoon Saloon but has loved collaborating with first-time co-director Ross Stewart. “As a director Ross knows how to strike a fine balance between trusting animators to find creative solutions and nudging them back into the universe of the film when animators get carried away,” the animator says. “I can’t talk about my collaboration with Ross without mentioning his passion for birds and his uncompromising commitment to naturalism when it comes to animating them.”

Irish artist Stewart, who co-directed with Tomm Moore, worked closely with Asquier-Brassart. Stewart has been involved with three Oscar-nominated animated features including “The Secret of Kells” as the art director. He has a deep appreciation for his teammate.

“Emmanuel is one of those rare animators that can do extremely technically challenging scene set-up,” he says. “As directors, Tomm and I collaborated with Emmanuel on his animated scenes in ‘Wolfwalkers’; in describing, as best we could, the rhythm and motion of the shape language, especially when working with the rhythm of the songs.”

Favorite Moments
Asquier-Brassart: “The sequence that jumps to my mind is the one in the forest when the carvings on the stones light up around the English soldiers. At this point Cromwell looks more unsettled than ever and shouts ‘witchcraft!’ I remember loving the thought of Cromwell’s worldview crashing down in his head.”
Stewart: “There are many, but the whole ‘running with the wolves’ sequence is one that I love and when I see it, can often send shivers down my spine, not just from the epic climax of music and visuals, but because it signifies a moment of pure and utter joy and awakening for Robyn; when she can experience the world like she has never imagined — to be fully free and wild and live in the moment as a wolf.”

“Minari” (A24)
Score: Emile Mosseri, Cinematography: Lachlan Milne Editor: Harry Yoon
Lee Isaac Chung’s “Minari” exists in the space between those who acknowledge it as “an American movie about Asians” or “an Asian movie about Americans.” The narrative themes that the film explores are complex, but internationally acclaimed cinematographer Lachlan Milne says he and the director “had a strong desire to be as photographically simple” as possible. Milne took wide shots, incorporating as much of the cast as possible into each frame. When the vision of a film brings in elements of editing and music, Milne says that the three artisans “spoke at length about the lack of coverage we would commit to.” He adds, “We all discussed that the film would benefit from holding shots, and only going into closer coverage when there was a story moment to emphasize.

Chung shared two musical sketches with editor Harry Yoon, titled “Tall Grass” and “Tractor” that composer Emile Mosseri had created after reading the script. “It’s so rare to have the composer working so early in the process,” Yoon says. “It felt like a privilege to get anything so early, let alone music of this quality.” Mosseri, who is a graduate of the Berklee College of Music, did something rare for any technical artists. It was that music that Yoon saw as the piece that “elevated Milne’s gorgeous footage.”

Favorite Moments
Milne: “I love the sequence of Jacob alone in his field after work. We were waiting for night to fall so I went off to shoot the sun setting. Steven was on his own smoking a cigarette behind me. I pulled the camera of the tripod, slowly went up to him and started shooting. A lone farmer in an impossibly empty field.”
Yoon: “It’s definitely the unpacking scene. Although, it’s a little ironic for an editor to say that since so much of the scene is one long shot. As Soonja pulls out each item from her suitcase to give to her daughter — the anchovies, the red pepper, and the envelope of cash — I know that any Korean immigrant family will immediately feel pangs of recognition.”