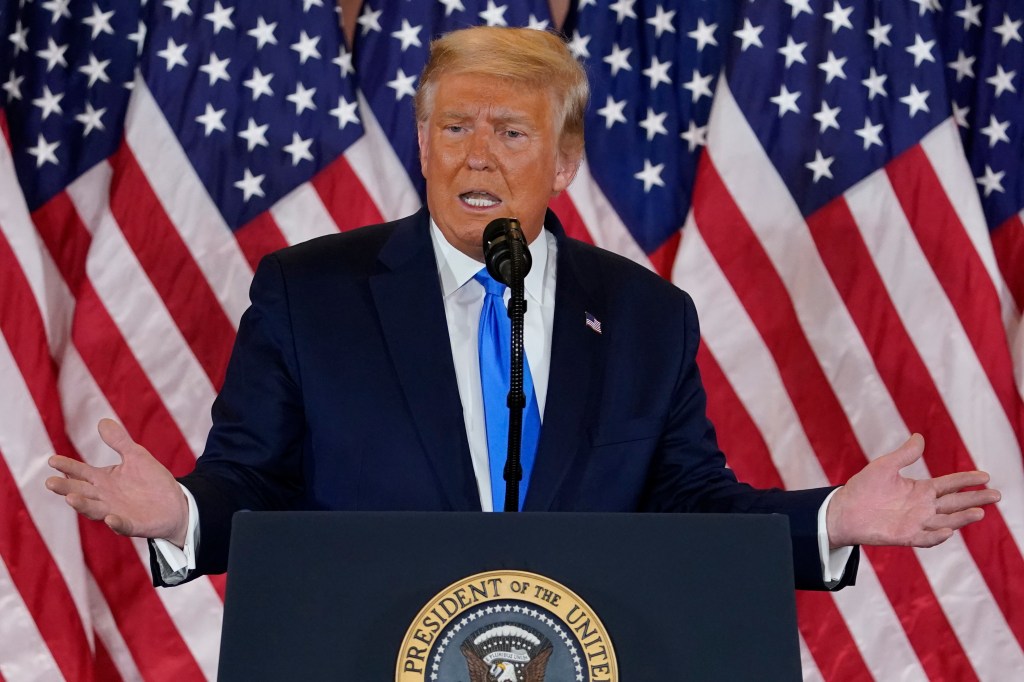 Speaking to supporters at 2:20 a.m. Eastern from the White House, President Trump falsely claimed victory in the presidential election and said that he would demand the U.S. Supreme Court stop counting votes.

Trump’s remarks capped off an intense, high-anxiety Election Day that sees the president in a close race with challenger and former vice president Joe Biden. He kicked off his speech by baselessly claiming that Republican voters were being disenfranchised.

Trump continued that he was “winning everything, and all of a sudden it was just called off.” Calling the results so far “phenomenal,” he indicated that he had been preparing to celebrate victory Tuesday night.

“Literally, we were just all set to get outside and just celebrate something that was so beautiful, so good, such a vote, such a success,” he said.

Despite the race still being too early to call, the president nevertheless attempted to declare himself the winner and threatened to enact court action to halt further ballots from being counted.

“Frankly, we did win this election,” Trump falsely asserted. “So our goal now is to ensure the integrity, for the good of this nation — this is a very big moment, this is a major fraud on our nation. We want the law to be used in a proper manner, so we’ll be going to the U.S. Supreme Court. We want all voting to stop. We don’t want them to find any ballots at 4 o’clock in the morning and add them to the list. It’s a very sad moment.”

But delays in the count have long been expected due to the influx of mail-in ballots this year, amid the ongoing coronavirus pandemic that has kept millions of Americans from visiting the polls in person.

Trump spent most of his remaining time at the podium insisting that he was ahead in a number of races, claiming with no proof that it was “clear” he had won Georgia and North Carolina, when no major news outlets had called the results in either state.

On NBC News, Savannah Guthrie interjected to fact-check his statement, reminding viewers that no victories have been declared in battlegrounds such as Georgia, Pennsylvania and Michigan.

Vice President Mike Pence then took the stage to say that he believes Trump is “on the road to victory and we will make America great again, again.”

Trump had tweeted at 12:45 a.m. Eastern that he would be making a statement: “A big WIN!” He followed that with another tweet containing the unsubstantiated accusation that Democrats were trying to “trying to STEAL the Election,” which Twitter flagged as “misleading about an election or other civic process.”

Facebook noted on Trump’s identical post to its platform that “final results may be different from initial vote counts, as ballot counting will continue for days or weeks.”

The race to 270 electoral votes has thus far been too early to call. The Associated Press has called a number of states, though many results will not be determined until Wednesday or later. Among key swing states, Trump has been declared the winner in Florida, Iowa, Ohio, and Texas, while Biden has been declared the winner in Minnesota, New Hampshire and Nebraska’s 2nd Congressional District.

Biden addressed supporters late Tuesday night outside the Chase Center in Wilmington, Del., telling them to “keep the faith.”

“We believe we’re on track to win this election,” he said. “It ain’t over until every ballot is counted… but we’re feeling good about where we are.”

Biden added that it was not his place nor Trump’s place to declare the winner of the election.

“That’s the decision of the American people,” he said.