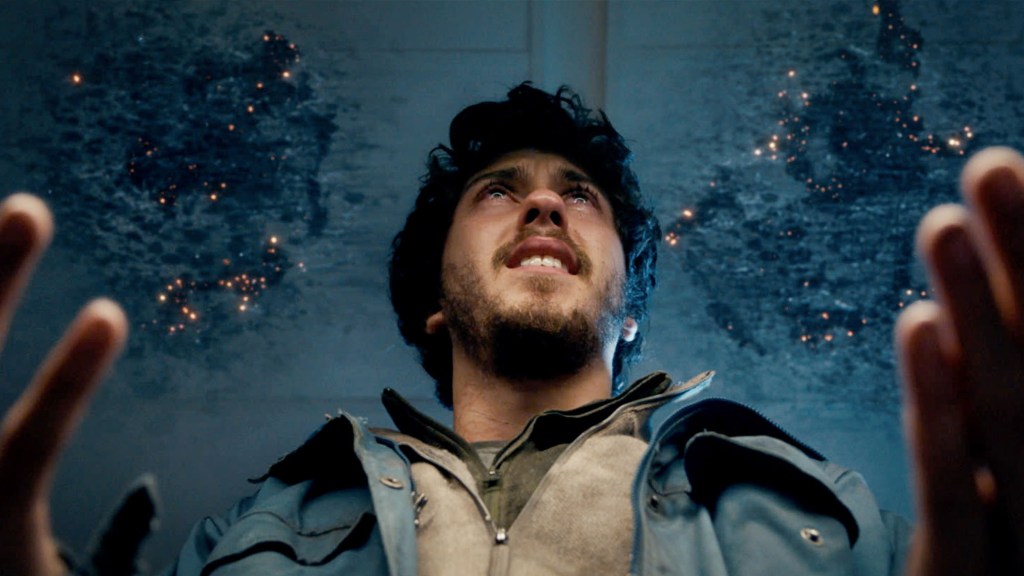 In “Mortal,” a film plagued by assorted crises and confusions of identity, one stands out at the very beginning: It’s an R-rated superhero movie that assumes its audience doesn’t know the meaning of its title. An introductory chyron helpfully offers the single dictionary definition “a human being,” without going into any of the others. That doesn’t bode well for a wealth of words or ideas in Norwegian director André Øvredal’s allegedly original adventure, which starts on a chilly, mildly intriguing note before sinking into its own puddle of very, very familiar reference points. This is an origin story we’ve seen before, and not just in the generic sense: Its protagonist is a strapping young man in Norway who reveals, early on, the power of thunder and lightning in his fingertips.

If you haven’t put two and two together, buckle up: You might be in for a ride. For the rest of us, what surprises “Mortal” holds largely relate to the oddity of its construction and its tonal whiplash, as a thin, repetitive narrative skips from emo “Twilight” moping to dour Scandi-noir procedural to dollar-store Marvel ripoff. That it doesn’t wear any of these hats with particular aplomb comes as a disappointment from Øvredal, whose 2010 breakout hit “Troll Hunter” meshed genre tropes with genuine glee and ingenuity. “Mortal,” on the other hand, wears none of its quirks with real confidence: From its chintzy visual effects to the gawky, timid presence of Nat Wolff in the lead, everything here feels a sheepish substitute for brighter, brasher Disney equivalents. Most mystifyingly of all, Øvredal’s lopsided sense of humor has deserted him entirely: The sillier the story gets, the more glumly and earnestly the film trudges through it.

A largely dialogue-free opening sequence sets up expectations of something more sophisticated and enigmatic, as we encounter the taciturn, stricken-looking Eric Bergland (Wolff) living wild in the forests of Norway. Skulking from one makeshift camping site to the next, he shies anxiously away from potential human contact, as trees are set inexplicably ablaze in his presence. Large swaths of his skin are scorched to the color of an oil slick; “If you touch me, you will burn,” he warns a teenage bully who accosts him in a field, before the kid promptly dies on the spot. Explanations are forthcoming, though they’re more derivatively far-fetched than we might hope.

After Bergland is arrested and detained for this odd case of manslaughter-by-contact, herky-jerk passages of exposition reveal that he’s an American backpacker who arrived in the country to research his Norwegian heritage; three years before, he seemingly started a house fire that left five people dead, and has been on the run ever since. Much of this information is unloaded on Christine (Iben Akerlie), a police-appointed psychologist whose powers of analysis are evidently stymied in his uncanny, literally hair-raising presence: “Are you the next Jesus?” she gawps.

Though he sets literal sparks flying when his emotions rise, there isn’t much obvious electricity between these two under-written cyphers: Wolff is all furtive, glowering angst, while the appealing Akerlie can only do so much with a character brief that seems to have stopped at “Jennifer Lawrence meets Kristen Stewart, but Nordic.” Nevertheless, the script (mostly, and stiffly, in English) is determined that she be the trusting, pure-hearted Bella to his haunted, misunderstood Edward, and so they flee the law together, at which point “Mortal” adds “half-hearted manhunt thriller” to its genre checklist. In a particularly sketchy subplot, U.S. government agent Hathaway (Priyanka Bose) wants her hands on Bergland, dead or alive, for reasons even the film doesn’t pretend to care about: Cue an obligatory car chase, a couple of standoffs, and a whole lot of nasty weather conducted by our blank-slate hero.

Even the film’s grander setpieces suffer from the synthetic sameyness of the strictly adequate effects work: If you’ve seen one shot of Wolff’s body fritzing and gurning and turning into a literal lightning rod, white digitized bolts flashing all around him, you’ve pretty much seen them all. It doesn’t help that the most spectacularly mounted of these, set against the soaring, clean-lined expanse of the rural Hardanger Bridge, comes around the halfway mark, making everything that comes after feel like a tediously extended coda — despite the fact that its most essential framework of superhero lore is introduced in the final half-hour. Yes, it’s both an origin story and an intended, cliffhanger-tailed franchise-starter, though there isn’t much here to compel the audience’s continued investment. Norway’s damp woodland scenery — attractively shot in muted, flannelly hues by Roman Osin — might be the film’s most consistent asset, and even that looks better without several layers of CGI stormdust hanging over it.