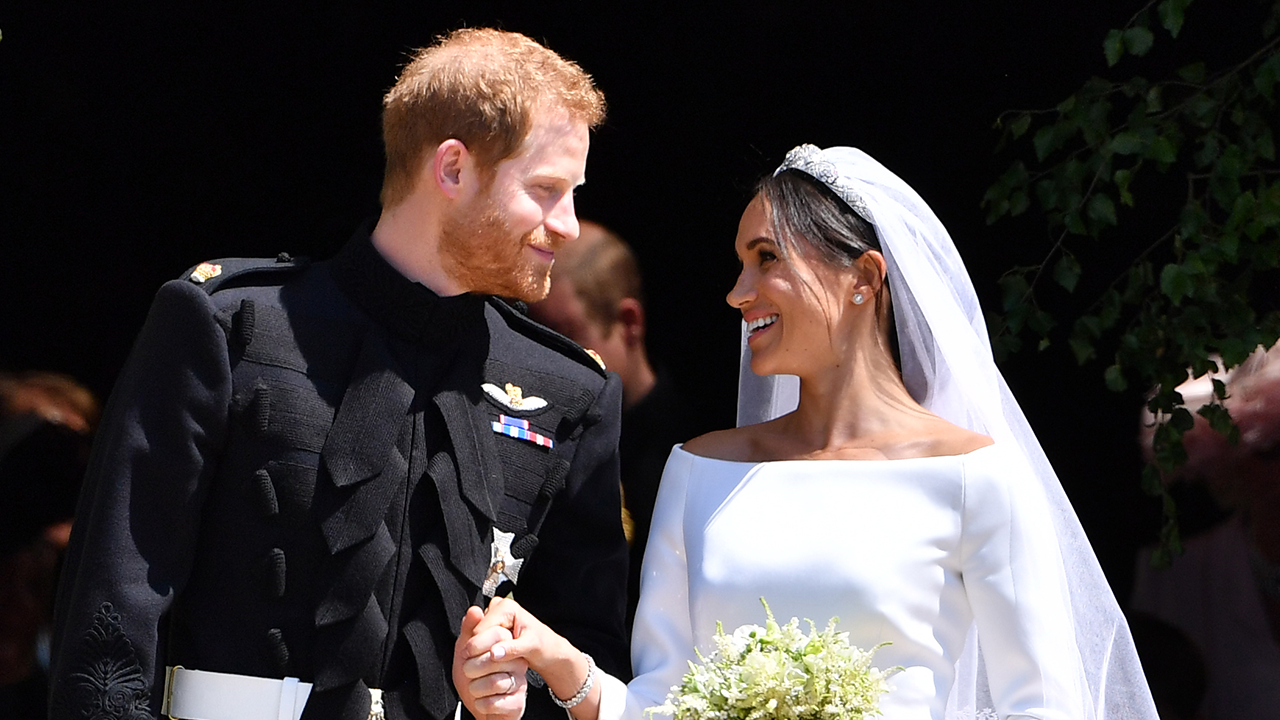 Meghan Markle is sharing some sweet details about her royal wedding with Prince Harry.

In the upcoming documentary, Queen of the World, honoring Queen Elizabeth II, the Duchess of Sussex candidly speaks about her “something blue.”

Meghan appears multiple times in the opening montage, in shots of her in her wedding dress, as well as all the stylish outfits she’s worn over the past year in outings with the royal family. Later in the documentary, we get to see the former Suits star seeing her gorgeous Givenchy gown for the first time since her May 19 nuptials.

“My goodness. Amazing isn’t it?” Meghan raves, as curators of the Royal Collection Trust get ready to put the gown on display for a new royal exhibition. “Beautiful.”

She then reveals that something special is hidden in the inside of her dress, commemorating her first romantic date with Prince Harry.

“Somewhere in here there’s a piece of — did you see it?” she asks. “The piece of blue fabric stitched inside. It was my something blue. It’s fabric from the dress I wore on our first date.”

It’s also revealed that the intricate veil Meghan wore on her special day featured flowers from each member of the Commonwealth. The veil was adorned with 55 flowers in honor of each of the the 53 Commonwealth nations, stalks of wheat to symbolize love and charity, and two special additions: Wintersweet, which grows in front of the couple’s Nottingham Cottage home at Kensington Palace, and the California poppy, the official flower of Meghan’s home state.

“When people come they can find their flower,” she explains. “There are so many different, beautiful features there. I think also with Harry’s role as youth ambassador for the commonwealth, it was so important for us to have a spirit of inclusivity in the wedding.”

“I stuck in a couple of flowers that were important to me as well, personally,” the Los Angeles native adds. “But there is a California poppy in there, which has nothing to do with the Commonwealth, but it is where I’m from.”

She also says that it was a “fun surprise” for her husband, who didn’t know she was doing something so creative with her veil.

“He was really over the moon to find out that I would make this choice for our day together,” she recalls. “And I think the other members of the family had a similar reaction and just appreciation for the fact that we understand how important this is for us and the role that we play and the work that we’re going to continue to do within the Commonwealth countries.”

While Queen Elizabeth II’s work in the Commonwealth is the primary focus of the documentary, Meghan is heavily featured throughout as part of the royal family’s newest generation continuing their grandmother’s work around the world. (Her husband, Harry, was named the youth ambassador for the Commonwealth.) At one point, she’s even celebrated for breaking barriers in Britain.

“Meghan Markle is the daughter of a black woman [Doria Ragland]. She’s entered the royal family and that gives me pride,” Benjamin Fraser, who was a guest at a Buckingham Palace event celebrating Caribbean scholars, says in the documentary. “She is going to become a symbol of hope and encouragement to many young women across the Commonwealth. And I’m inspired. There is some serious movement taking place across this country and she’s a big part of it.”

Queen of the World debuts Monday, Oct. 1 at 8 p.m. ET/PT on HBO. The documentary will also begin to air in the U.K. on Tuesday, Sept. 25 on ITV. In the meantime, watch the video below for more on the royal family.

Meghan Markle and Doria Ragland are the Most Stylish Mother-Daughter Duo: Pics!