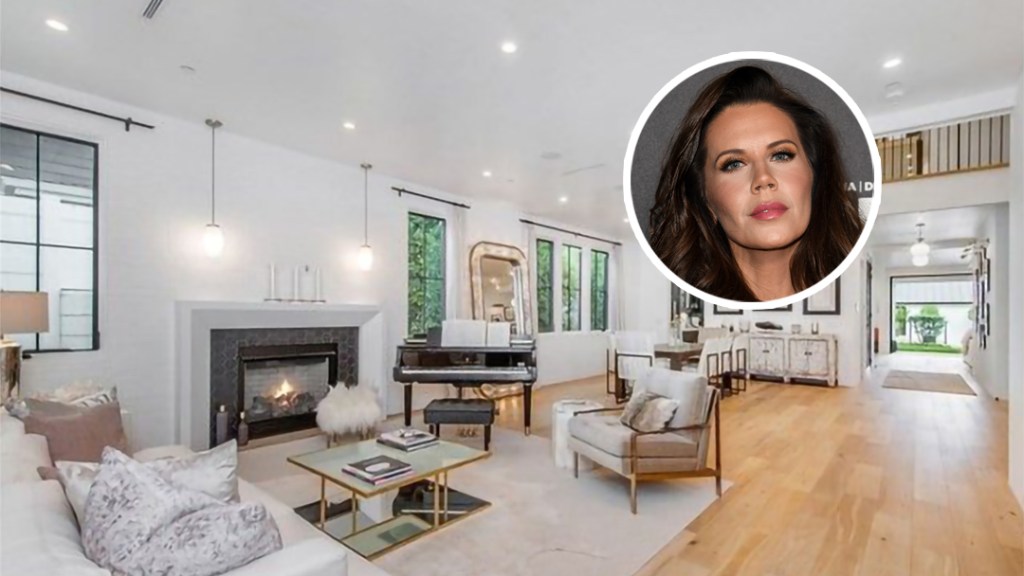 After two months on the market and a healthy price chop, Tati Westbrook has succeeded in unloading her Los Angeles home. The controversial YouTuber received $3.8 million from an as-yet-unidentified buyer for the leafy Sherman Oaks estate — that’s exactly $500,000 more than she and husband James Westbrook paid for the place six short months ago.

Sited mid-block on one of the neighborhood’s best streets, the walled and gated modern farmhouse was built new in 2016 by a local developer. The Westbrooks moved in circa 2017, at first electing to rent from the previous owner. In spring ’17, they hired YouTube-famous design duo Mr. Kate to transform the property’s detached guesthouse into a slick storage room/filming studio for Tati’s videos.

Because the quarter-acre lot is notably long and narrow, the house itself is likewise long and narrow, beginning downstairs with an elongated great room that combines a fireplace-equipped living area with a formal dining space. Beyond that, a hallway continues past a powder room and walk-in wine closet to a more casual gathering room that features a family area, with another fireplace, and a chef’s kitchen with quartzite countertops and top-of-the-line Wolf and SubZero appliances, including a glass-fronted refrigerator. Also on the main floor are maid’s quarters, a large pantry, storage closet, an attached two-car garage, and a movie theater with leather captain’s chairs.

Upstairs lies another (smaller) family room, a laundry room, and three guest bedrooms, all of them with ensuite bathrooms and walk-in closets, and one of them done up us a glam office for her. The master suite, for its part, is five-star resort-worthy with a sitting area, marble-swaddled bath, and dual closets — the larger one for her, the smaller for him. Like the rest of the home, the master features wheat-colored hardwood floors and whitewashed walls, which collude to give the place a chic modern farmhouse vibe.

Although the backyard isn’t especially big, it’s well-appointed with an outdoor bar and al fresco dining area, two large patches of grassy lawn, and a dark-bottomed plunge pool with adjoining spa. At the far rear of the lot is the aforementioned guesthouse-turned-filming studio, which now offers dozens of built-in drawers for storage, a full bathroom, and views of the tranquil backyard.

Though she’s still regarded as one of YouTube’s most successful beauty influencers, with more than 9 million subscribers and a whopping 1.4 billion cumulative views to her name, Westbrook has been in the news since 2019 for all the wrong reasons. First there was her hugely viral “BYE SISTER” video exposé, which she eventually deleted, that caused widespread chaos in the YouTube community, followed by a second video one year later (“Breaking My Silence”) that received 12 million views but elicited decidedly mixed reactions.

More seriously, however, Westbrook is being sued for fraud by seasoned entrepreneur Clark Swanson, her former business partner in Halo Beauty, a startup in the vitamins and cosmetics arenas — two of the world’s most lucrative yet cutthroat industries.

The 30-page lawsuit makes for salacious reading, alleging — among a vast array of other things — that Westbrook once stated she could sell a “shit product” to her loyal followers, and that fellow YouTuber Jeffree Star was offered $500 million for his own beauty brand by L’Oreal, but declined to sell.

Though she’s been silent on social media for the last several months, Westbrook and her husband are believed to have moved back to her native Seattle, where she was born in the early 1980s. Records show the couple’s residence there is a multimillion-dollar condo in a famous and notably expensive high-rise complex in the suburban neighborhood of Bellevue. Sublimely located on one of the building’s highest floors, the Westbrook residence offers panoramic views of the entire city — and it’s only minutes away from the homes of major heavy hitters like Jeff Bezos, Bill Gates, and Steve Ballmer.