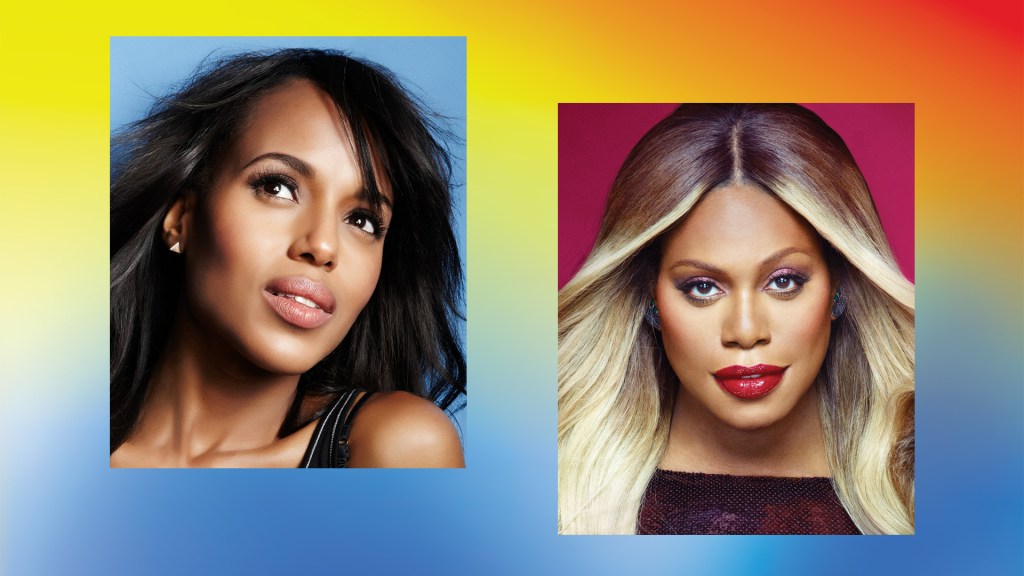 Laverne Cox and Kerry Washington know all too well what it’s like to be “the first,” as well as the mix of pride, pressure and responsibility that comes with it. That’s why they’re working to ensure that they’re providing opportunities for  underrepresented artists both on-screen and behind the scenes.

“All day Inauguration Day I was wearing my shirt that has [Vice President Kamala Harris’] face as a little girl, and it says, ‘The first, but not the last.’ Because that has to be the message,” Washington says. “The goal can’t be to be the only one in the room.”

Cox agrees: “The question for me has always been, ‘How do we keep the door open? How do we open a window? How do we just let the whole wall come down, so that more people can get in?’ That is the challenge of being a first something.”

Cox, who recently appeared in “Promising Young Woman,” and Washington, who starred in “The Prom,” have been lending their star power as producers to promote sociopolitical causes beyond Hollywood. Cox, who produced “Disclosure,” has been making docs since 2007 (winning a Daytime Emmy for “The T Word” in 2015), with plans to move into scripted content. Conversely, Washington’s Simpson Street banner has produced a litany of scripted work, but “The Fight” is its first documentary.

“This feels like a really important moment for us to be grappling with truth, and I think that’s why a lot of people are gravitating toward documentary filmmaking,” Washington explains. “We’ve had an ecosystem of dishonesty and lack of transparency in our leadership and gaslighting on an institutional, structural level. That has made us all really want to know the truth, speak the truth, teach the truth.”

Why did you start producing?

Laverne Cox: My twin brother always tells me the truth. Many years before I had a breakout moment as an actor and I [was in] acting school, wanting to have a mainstream acting career, my brother was like, “You’re Black and you’re trans — that’s not going to happen. You should produce your own work, you should do one woman shows, you can make your own films, that’s what you should be doing.” Producing came out of wanting to have some kind of control over my career.

Kerry Washington: There’s something about the agency — like, I get to control my body, myself, my story — that is so necessary to us feeling like the women we were meant to be. Our history [as Black women], particularly in this country but all over the diaspora, is so much about our bodies belonging to other people. So to be able to really have agency to call the shots, to be able to be the storytellers, is very empowering.

What is one change you were able to implement as a producer that you’re particularly proud of?

Cox: “Disclosure” director Sam Feder said, “I want this film to be by trans people completely. I want a mostly trans crew, and when we cannot find a transgender person to fill a role, I want to have that cisgender person men-tor a trans person.” He also had this idea that every single person on-screen was paid. It’s a really interesting model for documentary filmmaking that I want to try to incor­porate in the future.

Sam has taught me and is teaching the world that it is possible — that you can have a film with a very low budget, find funding, and hire mostly trans people, have a fellowship program, pay everyone for their stories.

Everyone in our film works in the business and often are the only trans people on set. So many of them talked about walking onto our set and everywhere they looked there was a trans person. And that was so integral in telling the story of transgender representation on-screen.

Washington: I had a similar experience on “Little Fires.” We knew we were telling a story about motherhood, race and class, so we cast this writers’ room to have somebody who could speak to [every topic] from a personal perspective. But we also didn’t have one Black woman in the room. We had three or four Black women in the room. We didn’t have one lesbian in the room; we really had inclusivity by building out a writers room where people could really have their voice, because they weren’t alone, and they didn’t feel the weight of being the “only” in the room.

When you’re the “only” on set whether it’s the only woman, the only Black person, the only Black woman, the only trans woman, you have all of this additional weight and responsibility to be speaking for your race, speaking for your people, speaking for your community, as opposed to being like an artist who also has the shared experience of belonging to that community. So to create an environment where our writers can be artists first and where we could have a multiplicity of perspectives of what it means to be a Black mama so that we could get to the reality of what this character is experience was, was really powerful and I felt it.

There were moments where, I would watch a particular edit and feel like “Oh man, I think the feedback I need to give right now, I need to give it to a Black person, because I need to bounce this off my sister first that I’m sure we’re on the same page when we come back explaining why we need to see more side eye in that scene. We’re able to say it in the right way and have people understand the dynamics of what’s happening for this Black woman in this moment.

It’s really powerful creating opportunities where people feel safe to bring their perspectives to the table and don’t have to carry the weight of being the “only” while they do that.

When is the first time that you remember feeling seen for your work?

Cox: It was 2014. I was in L.A. for the Emmys for my first nomination. We made eye contact across the room, and I was like, “Oh, my God, Kerry Washington” — utterly star-struck. Then you walked up to me and said, “How does it feel to make history?” I could cry thinking about it because it was so sweet and welcoming. So I don’t remember the first time I felt seen for my work, but I remember the first time I felt seen by Kerry.

Washington: I totally remember it. I think my question to you was to also say, “You’re not alone.” It was at a point in “Scandal” where the “history” was such a part of the conversation. I wanted you to know what a fan I was, but also that you’re not alone.