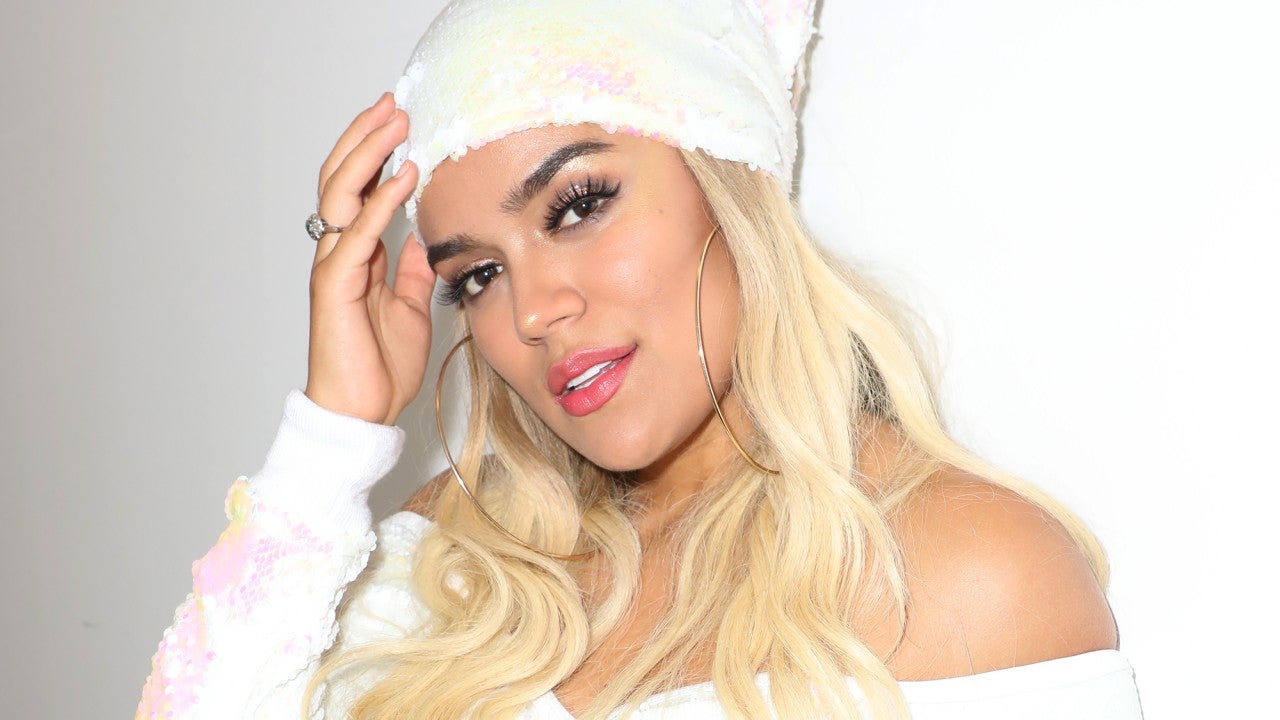 Her wrath is undeniable.

Karol G is unapologetic, uninhibited and slaying the Latin music industry with chart-toppers like “A Ella,” “Ahora Me Llama,” and “Pineapple.” Her album, Unstoppable, debuted at No. 2 on the Top Latin Albums chart in November. This month, she was nominated for two Latin GRAMMYs for Best New Artist and Best Urban song for “Mi Cama.”

ET caught up with the Colombian singer in celebration of Hispanic Heritage Month to discuss her rise to fame, how she’s breaking down barriers in a male-dominated music industry, her friendship with J Balvin and how her music idol, the late Selena Quintanilla, has influenced her career.

“I fell in love with Selena when I was 11 years old after watching her movie,” Karol, born Carolina Giraldo, told ET. “[I loved that] she was always working with her father, because the same happened to me. My father was always with me, all the time. I started researching about her story, and todas las cosas que ella hizo [all the things she did].”

“I want to be a legend like her,” Karol continued. “Not a person that passes and people forget about. I think she is, she still has number ones on Billboard and she’s still being nominated for awards and it’s been over 20 years since her death. She’s a legend and that’s what I want.Entonces ella de verdad es mi mayor inspiración [she’s truly my biggest inspiration].”

Earlier this month, Karol proved just how much she loves Selena. She got the “Como La Flor” singer’s face tattooed on her arm and documented the experience on Instagram.

In pursuit of diversifying her empire, the 27-year-old singer recently partnered with Ciroc to promote their limited edition Summer Colada.

“I feel very inspired because this is like the moment. I’m growing in this industry. I’m doing my music and I’m doing these partnerships,” Karol shared. “I want to be like Mr. [Sean] Combs. He’s a guy that I admire. He’s successful in the music industry and has different business projects. It’s like a culture and I want to do different things, not just about music.”

Karol says her driving force is her loved ones. “I want to help my family and provide for my [future] babies and take care of them.” The Latin GRAMMY nominee also credits her success to her fans for their relentless support.

Karol, who describes her sound as urban pop, was first introduced to audiences as a 14-year-old contestant on Colombia’s X Factor. As she defined her voice and music style, she began collaborating with musicians from her hometown and exploring the reggaeton scene. It was around that time that she met an aspiring young musician, José Álvaro Osorio Balvin, also known as J Balvin.

Balvin, a two-time Latin GRAMMY winner, is also a groundbreaking artist. He released his fifth album, Vibras, this year, proving once again that Latinx musicians can have a successful crossover album in the U.S. without having to record in English.

Over the past few years, Balvin has helped open doors for Karol G. The two have been friends for over 10 years and recently collaborated on a remix for her new single, “Mi Cama” featuring Nicky Jam. The music video has over 110 million views on YouTube.

“I met J Balvin 12 years ago and we’re like siblings,” she said. “We are very very good friends and he’s helped me a lot with my career. He gave me advice on what I needed to do as a female singer in this industry. There are not many girls doing reggaeton or urban music in the Latin music industry. So, I needed his words of advice and he’s always been there for me.”

It’s undeniable that Karol will achieve crossover stardom and she’s ready to be one of the leading ladies in Latin music. Earlier this month she was awarded the Inspira Award at the 31st Annual Hispanic Heritage Awards. The award show will air Friday, Sept. 28 on PBS.

“It’s huge. The Latin urban genre is getting bigger and bigger and bigger,” she said. “This year, I think we’re in, the girls are in, and everybody wants to make songs with us. I feel very happy. I know Becky G, Natti Natasha, and other Latina singers, we have been working many, many years and now we have the opportunity to show what we have, to show what we have been doing for many years.”

“Great things are happening for women in the Latin music industry. At the end of the day, I want to make the girls feel empowered,” Karol concluded.

In two weeks, Karol will embark in her first U.S. tour with Piso 21. For more information on tickets and tour stops visit her official page.

Cardi B Dishes on What Makes Her Feel ‘Effing Fabulous’ (Exclusive)