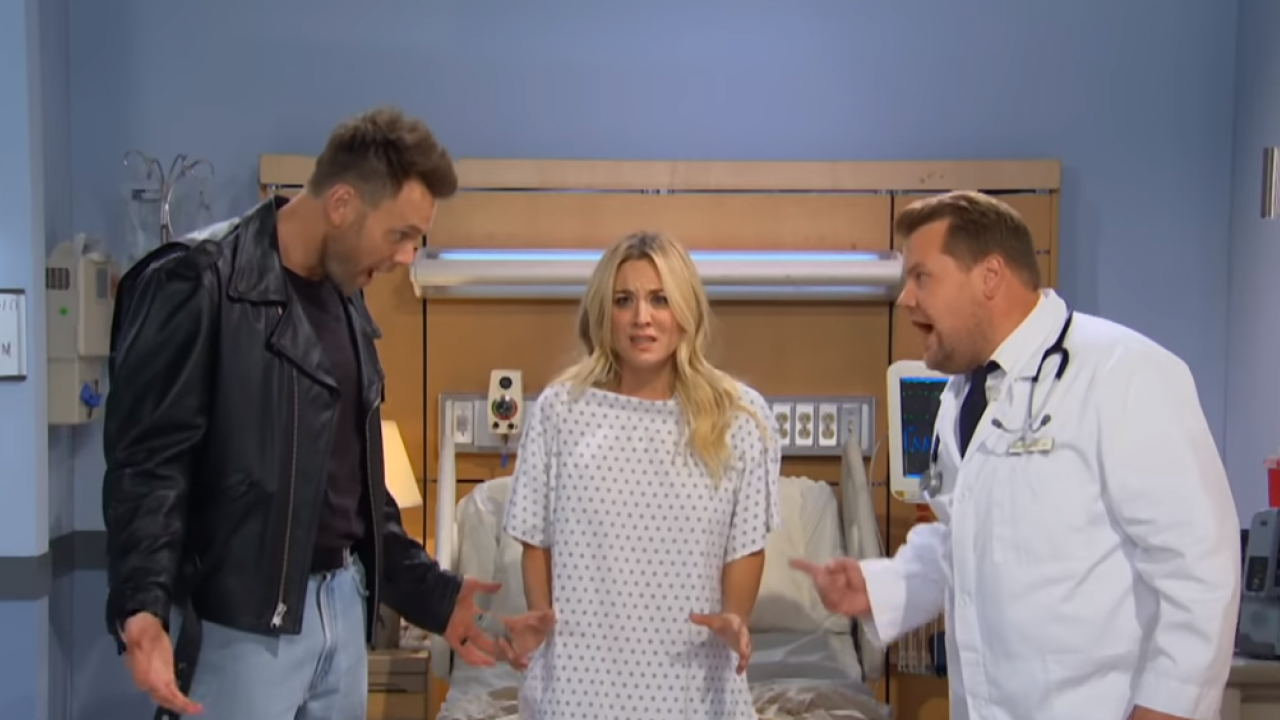 Drake is helping bring the drama to The Late Late Show With James Corden!

On Wednesday, host Corden enlisted Kaley Cuoco and Joel McHale for the latest edition of his soap opera, The Bold and The Lyrical. The trio acted out a hospital scene, with a script composed entirely of the rapper’s lyrics.

The sketch begins with Corden — who plays a doctor — entering the hospital room to find a bedridden Cuoco. “Last name ever, first name greatest,” he says, reciting Drake’s 2009 song, “Forever.”

“You used to call me on my cell phone,” an annoyed Cuoco replies with a “Hotline Bling” lyric. “Late night when you need my love.”

“I can’t do suit and tie. Can’t be in a room with you and stand on different sides,” Corden tosses back to the Big Bang Theory star, quoting “Finesse.”

The antics continue with lyrics from several other Drake hits, including “Started From The Bottom” and “The Motto.” When the sketch finally starts quoting the summer hit, “In My Feelings,” Corden begs, “Say you’ll never leave from beside me.” McHale then bursts into the room, presumably to win back the actress.

Cuoco waves off his advances, causing McHale to ask, “It’s about us right now, girl, where you going?” This is a line from the 2016 track, “With You.”

Corden and McHale continue to fight for Cuoco’s heart, until McHale messes up and uses a lyric from Cardi B’s song, “Bodak Yellow.” After the accidental slip, the soap opera gets right back on track when Cuoco appears to die — before suddenly coming back from the dead!

The guys keep duking it out over the TV star, with McHale initially opting for “Hold On, We’re Going Home” lyrics, while Corden first pleads his case again with lines from “In My Feelings.”

An epic slap-fight ensues, with both men asking, “Kiki, do you love me?!”

“I only love my bed and my mama. I’m sorry!” Cuoco screams, quoting “God’s Plan,” before running out of the room.

Cuoco, McHale and Corden aren’t the only stars who have performed to Drake lyrics this summer. The “In My Feelings” challenge quickly swept the Internet, with Sterling K. Brown, Ciara, Will Smith and more celebrities getting in on the fun.

Check out their epic dance moves: