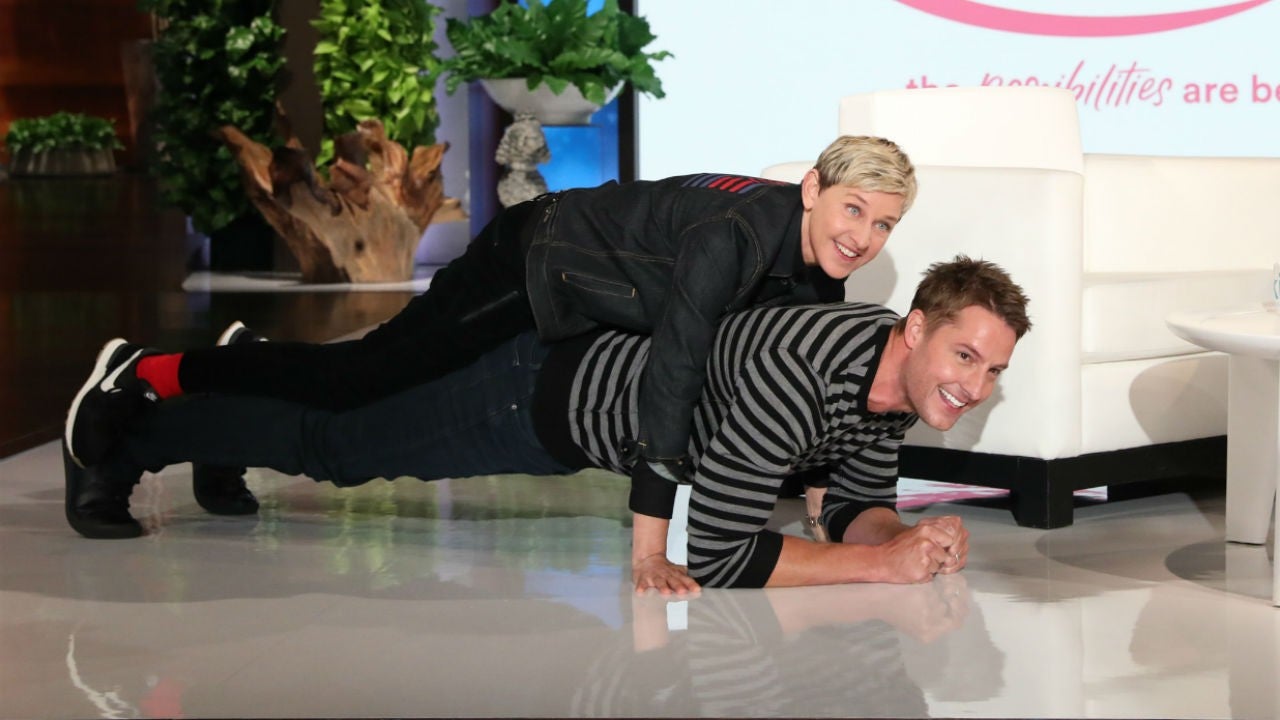 No fitness challenge is too tough for Justin Hartley!

The hunky This Is Us actor appears on Tuesday’s episode of The Ellen DeGeneres Show, and has a great response when asked about a video of him doing a plank with 200-pound weights on his back.

“See, it’s funny when you know the camera’s on, you do stupid things like that,” the 41-year-old actor quips.

“I can’t believe that wouldn’t be bad for your back,” DeGeneres notes.

“My back is not doing well,” Hartley jokes.

The NBC star then offers to get into plank position while DeGeneres interviews him. This is all to raise $10,000 through Ulta Beauty for breast cancer research.

“This is harder when you’re talking!” Hartley confesses while answering questions.

After declaring that his first celebrity crush was DeGeneres, the host puts a flower pot and mug of water on his back for “lying.”

After the actor had reached more than two minutes of planking, DeGeneres, lies on his back, forcing the star to carry her weight as well.

Earlier in the interview, Hartley opens up about his 14-year-old daughter, Isabella, who he invited to join him for the recent premiere of This Is Us. At the event, Hartley noted that his agent offered representation to Isabella.

“She kind of was like, ‘Yeah, uh, well, I mean, there’s a few things I’m interested in. I’m not quite sure I want to go down that road,’” he says. “And I’m like, ‘Babe! It took me years to get anyone to pay attention to me!’ But whatever, good for her, she’s too cool for school.”

Hartley also gushed over his daughter while chatting with ET’s Katie Krause at a pre-Emmys party, and what it’s been like having a high schooler in the house.

“It’s either going to go one way or the other. She’s either really going to enjoy high school or she’s going to hate it and it’s going to be this horrible thing. And she loves it so that’s good,” he shared. “As long as we’re kind and we forgive people and we listen to people, you know that’s what we’re built for I think. So, that’s the sort of things that I teach her and she’s I think her school has those values as well — so it’s nice. She’s enjoying it.”

For more from Hartley, watch the clip below:

‘This Is Us’s Justin Hartley Talks Kevin’s Journey, Admits He Thinks About His Character Dying (Exclusive)