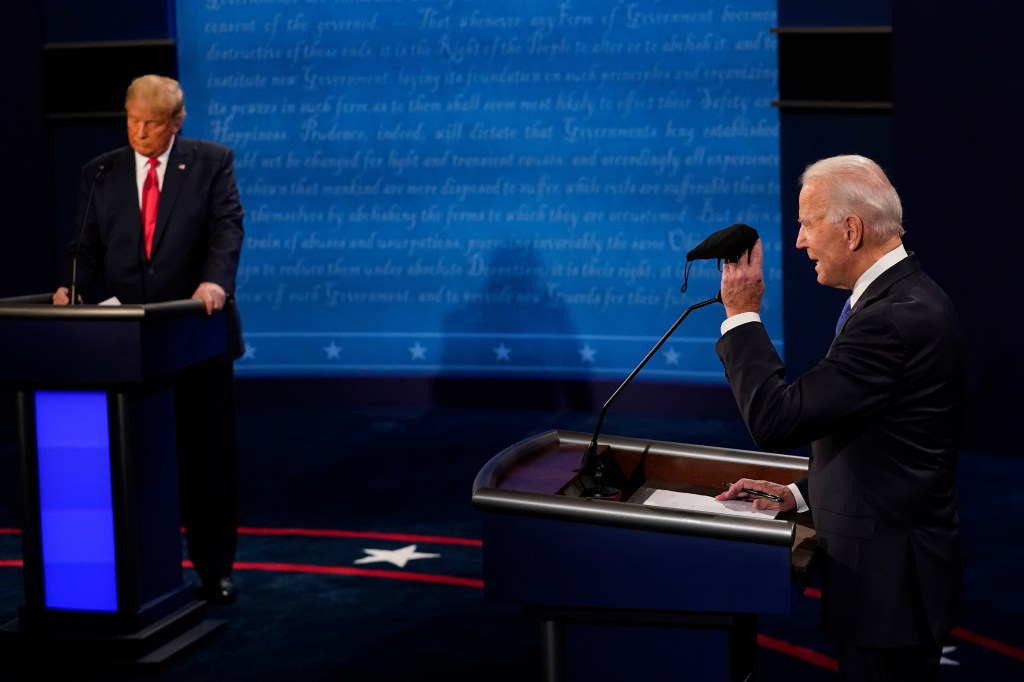 Democratic challenger Joe Biden accused President Trump of trafficking in Russian disinformation in the final debate on Thursday, and asked Americans to weigh each candidate’s character in deciding how to vote.

Trump brought up allegations involving Joe Biden’s son Hunter, referring to the “laptop from hell” cited in a New York Post story about the younger Biden’s business dealings in Ukraine.

“What he’s accusing me of is a Russian plant,” Biden said. “What he’s saying is a bunch of garbage. Nobody believes it except him and his good friend Rudy Giuliani.”

The issue came up when Biden asked voters to compare each candidate’s integrity.

Trump then brought up the laptop, calling Biden a “corrupt politician.”

The candidates then turned to the issue of race. Biden made reference to Trump’s oft repeated claim that he has done more for Black people than any president since Abraham Lincoln.

“Abraham Lincoln here is one of the most racist presidents we’ve had in modern history,” Biden said. “He pours fuel on every single racist fire, every single one.”

Though the debate featured heated exchanges on a series of subjects, there was nothing like the relentless interruptions that spoiled the candidates’ first debate.

NBC White House correspondent Kristen Welker kept firm control of the proceedings, aided by a new rule that allowed the microphones to be muted.

“I respect very much the way you’re handling this,” Trump said to Welker midway through the debate.

Biden repeatedly accused Trump of distorting the record, and of seeking to link him to policies like Medicare for All that he does not support.

In the early going, Trump sought to combat suggestions that his administration bungled the response to the deadly pandemic.

“We closed up the greatest economy in the world to fight this horrible disease that came from China,” Trump said from the stage at Nashville’s Curb Event Center. “We have a vaccine that is coming — it’s ready. It’s going to be announced within weeks.”

Pressed by Welker, Trump said the vaccine would be coming from Johnson & Johnson.

Biden cast shade on Trump’s assertions and was quick to hold up a face mask on national television. “This is the same fellow who said it was going to be gone by Easter,” he said.

Trump sought to raise corruption allegations against Biden at multiple points, arguing he had used his influence during his time in office to engage in questionable overseas business deals.

“You’ve raised tremendous amounts of money. Every time you raise money deals are made,” Trump said to Biden. “I think you have to clean it up and talk to the American people.”

Biden responded that Trump was long overdue for detailing the number of entities to which he owes money and for refusing to release his tax records.

“I’ve not taken a penny from any foreign sources in my life,” Biden said. “The only guy who made money from China is this guy.”