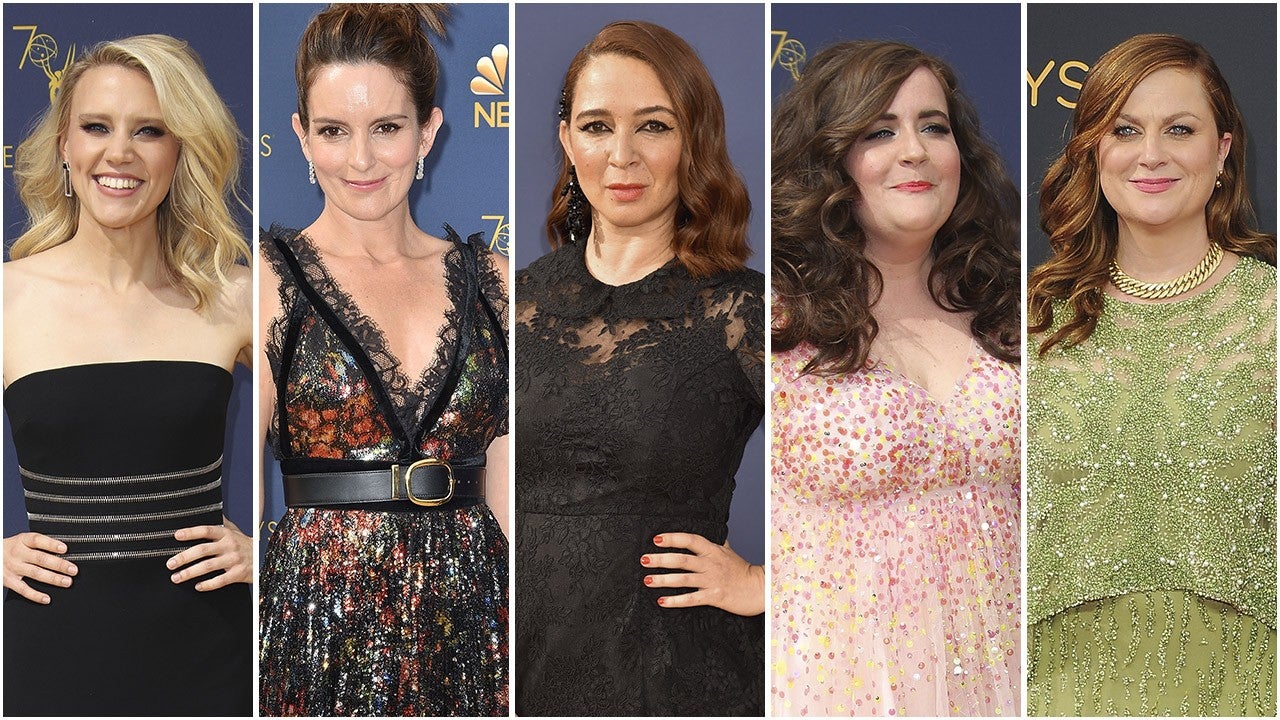 The 2018 Emmys ceremony was, without a doubt, the perfect platform on which to showcase some of Saturday Night Live’s biggest and brightest talents. The fact that “Weekend Update” co-hosts Colin Jost and Michael Che were helming the evening set the tone, of course, but what was perhaps even more memorable and impressive was the long list of former and current female cast members who dominated the awards show as nominees, presenters and more.

SNL alums Maya Rudolph and Tina Fey rubbed shoulders with current stars Aidy Bryant, Kate McKinnon and Leslie Jones, inadvertently stealing some of the Emmys’ best moments. And the opening skit kicked off with McKinnon and Kenan Thompson in a much-talked-about musical number, “We Solved It,” a sly, tongue-in-cheek nod to the industry’s self-congratulatory approach to diversity. (Rudolph and her Forever costar Fred Armisen also appeared in segments to reluctantly dole out small nuggets of Emmys history, proving that the actress is once again primed to host an awards show.)

Among Saturday Night Live’s 21 nominations this year were Bryant, McKinnon and Jones all up for Outstanding Supporting Actress in a Comedy Series. “It’s just comedy, baby,” Jones said of the noms. “Good energy coming through. We’re vibing together.”

Meanwhile, their predecessors Molly Shannon, Fey and Rudolph were all up for Outstanding Guest Actress in a Comedy Series for their special appearances on TV this past season. (Tiffany Haddish ended up taking home the award for hosting SNL.) In a very real way, the recognition of their talents and success — both on the hit NBC sketch comedy series, set to kick off its 44th season on Saturday, Sept. 29, and in their other creative endeavors that expand across film, TV and the stage — signals a golden age for the women of SNL.

“I noticed this year, it’s a lot of SNL alums and so many amazing women,” Shannon told Variety in August, adding to ET: “To be nominated opposite those powerhouse ladies is such an honor for me.” When reflecting on SNL and the Emmy success for many of its alumni, Shannon told Variety, “It’s a really great training ground for performing and writing, so it doesn’t surprise me people get recognized and then go on to continue great work.”

Shannon herself is coming off her “year of death and divorce,” earning critical acclaim for her roles in former SNL head writer Chris Kelly’s film Other People and on HBO’s Divorce opposite Sarah Jessica Parker 17 years after the sketch comedy juggernaut catapulted her into the upper echelons of comedy. Shannon has since reprised her standout roles as Gail on the Wet Hot American Summer series, commentator Tish Cattigan during the royal wedding and Val on Will & Grace, the role that earned her a 2018 Emmy nomination.

Also experiencing a much-deserved career renaissance is Rudolph, who was nominated for a 2018 Emmy for her guest role on The Good Place season two, earned praise as one of the voice stars of the Netflix animated series Big Mouth and has a starring role on Amazon Prime’s Forever, a suburban sitcom that’s anything but, which debuted to positive reviews in September.

Forever, notably, marks a lead-actress breakthrough for Rudolph, who has previously had success in ensemble casts, including Bridesmaids, Life of the Party and Sisters. “There’s that thing of like, ‘She could read the phone book and it’d be funny!’” Fey said of Rudolph in a recent New York Times profile. “But she really could. And it’s not like she’s trying to act funny. A lot of times, actors think, Oh, and then you like kind of act funny — that’s usually a disaster. It’s just, she is so inherently — she’ll make a specific choice to be some strange person that lives in her imagination, and it will just come out funny.”

Fey — who is perhaps the most successful female SNL alum thanks to 30 Rock and films Baby Mama and Sisters — has been busy behind the scenes, most recently creating, writing and producing Unbreakable Kimmy Schmidt, which will end with the second half of season four in 2019, and the Tony-nominated musical adaptation of Mean Girls on Broadway.

Elsewhere on TV, Amy Poehler hosted the critically adored reality-competition series Making It over the summer, reuniting her with her Parks and Recreation co-star Nick Offerman. The show has been renewed for a second season. She is also making her directorial debut with the Netflix movie Wine Country, which reunites a small legion of SNL women — Fey, Rudolph, Ana Gasteyer, Emily Spivey, Paula Pell and Rachel Dratch — for an all-girls’ weekend trip to Napa Valley.

Even one and two-season wonders like Casey Wilson, Jenny Slate and Michaela Watkins have become reliable TV players, with Watkins starring on Hulu’s Casual as well as slated to appear on new seasons of Catastrophe and Search Party. Meanwhile, Slate can be heard on just about every popular animated series, including Big Mouth and Bob’s Burgers.

Perhaps one of SNL’s most notable breakouts, Wiig is making moves on the big screen as well. After dominating comedy with the likes of Bridesmaids and Ghostbusters and dabbling in drama with The Skeleton Twins, The Martian and Mother!, Wiig will tackle a new genre — action — as Dr. Barbara Minerva/Cheetah opposite Gal Gadot and Chris Pine in the upcoming sequel to Wonder Woman. She will soon reunite with Rudolph as one of the voice stars of Fox’s upcoming animated comedy Bless the Harts.

Long-running careers such as Wiig’s or those of Fey, Rudolph and Shannon are promising reminders for SNL’s current leading ladies — especially Bryant and McKinnon — that there are so many possible paths to take as they continue to expand their reach beyond late-night.

This year marked Bryant’s first-ever acting Emmy nomination after seven seasons of memorable impersonations ranging from Elton John to Adele, James Corden and Sarah Huckabee Sanders — and the gravity of the honor was not lost on her. “There is an uncertainty on SNL that can be kind of jarring and can shake you up,” she told The Wrap earlier this year. “But I also think, and maybe the proof of this is in all the different nominations for the show, that it makes you a hard-ass performer and writer and producer, because you’ve been through a lot of challenges.”

And the pay-off is already apparent. In April, Hulu announced it ordered a Bryant-led series executive produced by Michaels and Elizabeth Banks based on blogger Lindy West’s book Shrill. In addition to starring as Annie, an overweight young woman trying to become a journalist while dealing with bad boyfriends, sick parents and a demanding boss, Bryant will write for the series.

Of the current roster of women on SNL, McKinnon has made the biggest splash outside the show, with breakout roles in Ghostbusters and Rough Night. She most recently shared the screen with Mila Kunis in this summer’s The Spy Who Dumped Me and has been cast in Fair and Balanced, the upcoming film about the downfall of Roger Ailes, opposite Allison Janney, Charlize Theron, Margot Robbie and Nicole Kidman.

Following two Primetime Emmys wins, McKinnon is most primed for a successful post-SNL film career — so much so that there have been rumors swirling around the actress’ departure from the series. At the Emmys, McKinnon told ET she is “very much returning,” at least for the 44th season, while creator Lorne Michaels left things a little more open. “This is her last year on her contract,” he revealed, adding he’s in no hurry to push his star out the door. “She could stay, she’d get a lifetime contract.”

Last year, upon winning the Outstanding Supporting Actress Emmy over Jones and fellow SNL star Vanessa Bayer — who left SNL in 2017 and  has created her own post-series career path, with guest spots on Will & Grace, Love and a co-starring role in the Netflix comedy Ibiza— McKinnon told ET that she was proud to be a part of the cast at that particular point in time: the run-up to and the aftermath of the 2016 election. “Thinking about the history of Saturday Night Live, that is an American cultural institution, and to have gotten to be a part of this season in particular is the highest honor I could ever ask for,” she said.