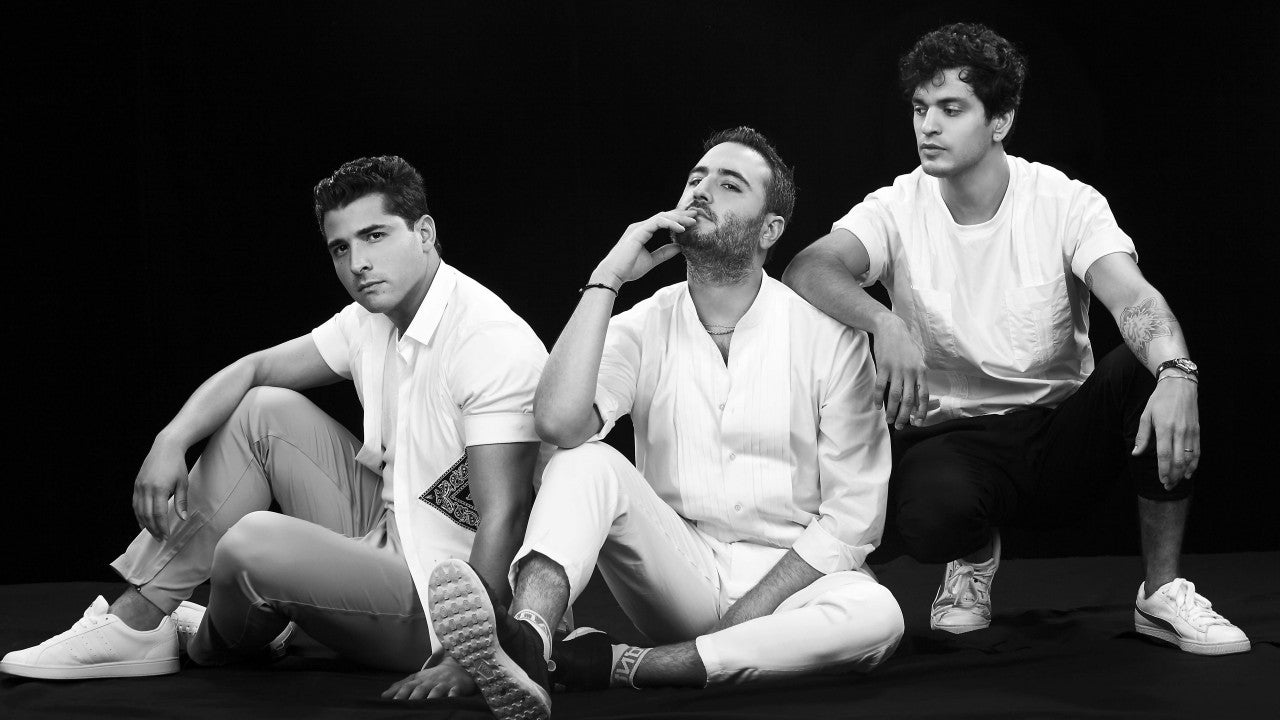 Reik has been creating beloved pop ballads for the past 14 years, but with the ever-evolving music scene, the Mexican trio is working harder than ever before.

With five studio albums and two live LPs, the Latin GRAMMY winners — composed of lead singer Jesús Navarro and guitarists Julio Ramírez Eguía and Gilberto “Bibi” Marin Espinoza — have been exploring new musical territory and collaborating with various artists in different genres. As urban music — in Latin music, urban is the presence of reggaeton or Latin trap elements — takes over the mainstream, Reik is experimenting with their sound, yet staying true to it as well.

“I would say for the three of us, it’s definitely harder [to create new music right now],” Julio tells ET. “In the urban scene, there are so many different styles. Before we were doing these urban collaborations, I personally thought they all sounded the same. But once we started working with different writers and producers we were like, ‘Oh no, this guy has a totally different sound, totally different songwriting process or melodies or lyrics.’ So that’s when it became even harder…because it was like, just when I thought I knew what this was all about, it’s nothing like that.”

“It was hard, but we’re having a lot of fun,” he continues. “We’re learning a lot. It’s cool to get out of your comfort zone. I think that if we didn’t do that, we would just be three stubborn 30-year-old men with a 14-year musical career.”

It’s been two years since Reik released their last album, Des/Amor, and it wasn’t until they dropped their first reggaeton single, “Me Niego” featuring Ozuna and Wisin, earlier this year that the band hit a major milestone in their careers. The one-off track ranked No. 1 on Billboard’s Latin Airplay chart, topped the charts on all digital platforms and recently received the Diamond certification in the U.S.

“We made it a point to be there for the whole process, to find the right songs, the right lyrics, things that we can perform that we can really defend,” Jesús expresses, adding that sometimes you hear pop acts trying to get into the urban world and it “sounds off.” “We want to do urbano. We want to try new things and do everything that is out there, but we can’t lose ourselves in the process because then people won’t connect with it. I’m very appreciative that the reaction for the work that we’ve done was so huge. Honestly, to my memory, I’ve never worked more consciously than I am now. So it’s very motivating that things are happening like this.”

The trio, however, has those longtime fans that aren’t always so receptive to the new material — and they’re fully aware of them.

“It’s one of those things where you have to take the risk and we can always do what we used to do, but I hope hardcore fans understand that,” Julio says. “We can always do that and we’ll keep doing that. That’s why we have acoustic versions for everything and that’s why we keep it real with our lyrics.”

Bibi echoes that sentiment, adding that “people, in general, have a hard time with change. It’s just a matter of being able to embrace whatever comes along the way and what’s going on in music these days, everything is urban.”

“Even in the English-speaking world, everything sounds a little bit urban,” he adds. “So for us, it’s either, how the saying goes, ‘renovarse o morir’ [renovate or die]. If people are still grabbing on to the old Reik, there’s always going to be the old records. They can go back and listen to them.”

That doesn’t mean that Reik isn’t going to stop creating pop ballads. “But we definitely don’t want to keep doing what we did 15 years ago,” Jesús stresses. “We want to do something new, something interesting, and keep people interested.”

And how they’re doing that is collaborating with the hottest talent out there. Their latest collaboration, “Amigos Con Derechos,” with Maluma already has over 65 million views on YouTube in less than a month.

“We originally wrote a ‘chanteo,’ the rap part, just in case. We never knew it was going to be for Maluma,” Julio — who wrote the song with Maluma, Servando Primera, Andrés Castro and The Rudeboyz — tells ET. “We just wanted to write a good song. But when we sent it to him, he wrote his own part and it was fun. I remember Jesús going into the studio and recording the demo. He loved it. It was a good sign that something was going to happen with this song.”

As far as their next move, they will continue to release singles as they “adjust to the new ways that people are listening to music now.” They are also more protective of the material they put out.

“We don’t want to waste songs,” Jesús confesses. “We write most of our own material and as we get older and we take our job more seriously, we are less willing to let songs just disappear. We had so many songs that we loved and were so into, but because of the way that things were structured, they never saw the light of day. We’re trying to make sure that every song we put out is used to its fullest. I don’t know exactly what it’s going to look like, but we’re going to make sure that it is interesting.”

It’s no doubt that Latin music is having a moment — Beyonce’s collaboration with J Balvin, “Mi Gente,” Justin Bieber and Luis Fonsi’s “Despacito” and Cardi B’s “I Like It” featuring Balvin and Bad Bunny to name a few. On their end, Reik hopes that these collabs keep growing and that Latinxs in the industry “make sure to make the most out of this moment.”

“It is amazing to see so much Spanish music in the mainstream,” he notes. “To have Balvin collaborating with Beyonce, that is very evidently requested by Beyonce… Or Maluma performing at the 2018 MTV Video Music Awards completely in Spanish. It’s unbelievable that it happened. You don’t have to record an English record to be a worldwide artist anymore. That’s amazing.”

“We’ve seen this, we used to be the kings of the scene. Sin Bandera, Camila, Reik, all of us,” he explains. “There was nothing else, and all of a sudden you’re comfy and then the new thing is urban… If [artists] don’t come up with new stuff, new beats or whatever, people will get over it and a new trend will come up. And then they will be trying to blend in with the new stuff… I would just add [to continue creating] because then maybe we will have to wait another 15 years to say, ‘Oh, the Latin music trend is back.'”

“We shouldn’t let it go, we have it. It’s right here. Let’s keep going and hold on.”