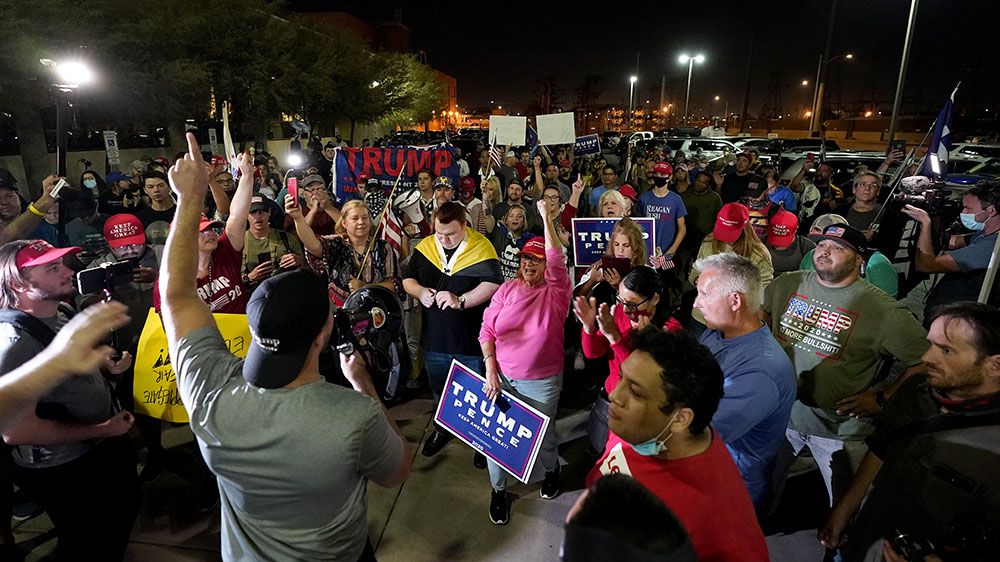 As hundreds of Donald Trump supporters congregated outside the Maricopa County Recorders Office in Phoenix, Ariz., Wednesday night, Hollywood figures were quick to point out the irony of Trump-supporting crowds shouting “Fox News Sucks,” along with similarities to a storyline in “Veep.”

With Americans anxiously awaiting the final results of the presidential election, observers on social media found an outlet for their anxieties by making light of crowds that in some places were demanding for votes to be counted, and in other places calling for counting to stop.

The Trump camp was reportedly enraged that Fox News was among the first outlets to call the race for Joe Biden in Arizona, and the New York Times reported that Jared Kushner put in a call to Rupert Murdoch.

“Veep” writer Alexis Wilkinson wrote, “We wrote this on @VeepHBO…and they just…tweeted it out.”

Actor Alyssa Lavacca unearthed a clip of the relevant scene, in which Jonah Ryan and others chant “Count every vote.”

Judd Apatow aptly quote-tweeted a video of the chaos along with the caption “2020 in a nutshell.”

Michael Schur, known on Twitter as Ken Tremendous, concocted a fill-in sheet for the “Trump Election Mob” in which protestors needed to decide if they wanted to stop the counting or keep counting, referring to Trump supporters’ seemingly contradictory demands in various locations.

You want them to (circle one) STOP THE COUNTING
KEEP COUNTING

Actor Leslie Grossman said the irony of the “Fox News Sucks” chant was the “first soul cleansing true belly laugh” she has had since 2016.

“Birds of Prey” director Cathy Yan was one of many who found it startling to hear the epithets coming from Trump supporters who had likely been supporters of the news network in the past, though Trump has turned to criticizing the network more recently.

Gabrielle Union, Mark Ruffalo and Gloria Calderon Kellett were among many tweeting the “Stop the Vote/Count the Vote” video with commentaries.