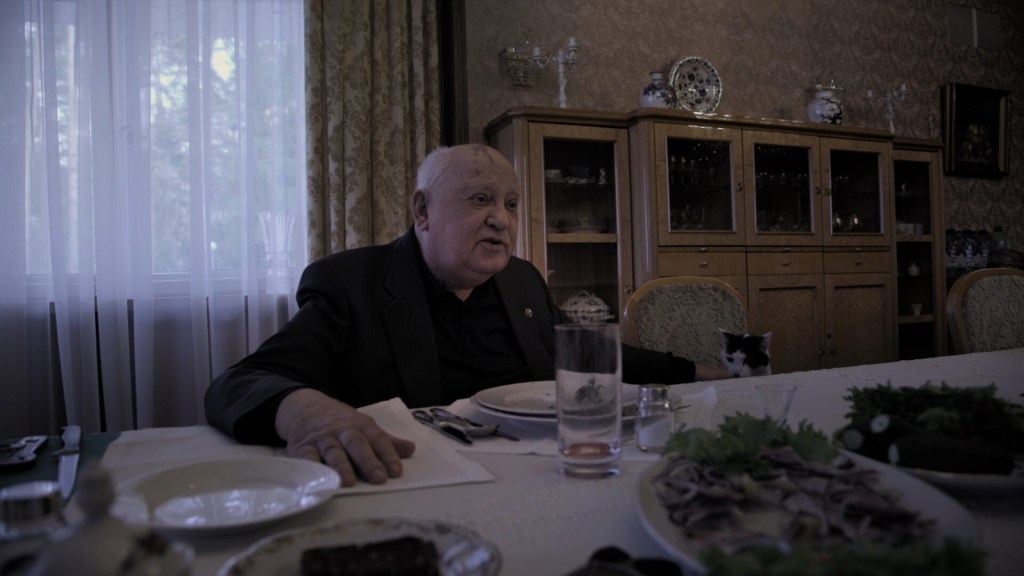 Even in his dotage, stooped and tissue-skinned and walker-dependent, the former (and final) Soviet Union president Mikhail Gorbachev is an imposing, even intimidating figure — formidable enough to have stymied the venerable Werner Herzog two years ago. The German auteur’s oddly cautious 2018 doc “Meeting Gorbachev” was a missed opportunity, colored by the filmmaker’s obvious admiration for his subject but never getting under his skin in any sense. In “Gorbachev. Heaven,” Russian docmaker Vitaly Mansky has another go at cracking this particularly tough nut, with richer, more resonant results — making a virtue of Gorbachev’s enigmatic, evasive manner in what turns out to be more poetic character study than exacting political profile.

Alternating between head-on rhetorical confrontation and melancholic everyday observation, this weighty IDFA premiere should match the festival and arthouse profile of Mansky’s recent films “Under the Sun” and “Putin’s Witnesses,” sealing his reputation as one of the most essential working documentarians — with gutsy bravado to match his delicate formal finesse. If not quite as incendiary as “Putin’s Witnesses,” a scathing first-hand exposé of the current Russian president’s rise to power, “Heaven. Gorbachev” makes for sharp complementary viewing, as Mansky continues piecing together intimate perspectives on a period of seismic political transition. (One wonders if an intermediate Boris Yeltsin doc is on the cards.)

Unlike Herzog’s film, Mansky’s is not overly preoccupied with providing a historical overview of the era. Sporadic title cards offering brief primers on key political figures and movements feel like afterthoughts in a documentary that otherwise presumes viewers are au fait with the ups and downs of Gorbachev’s career. (It’s hard to imagine anyone in the audience needing Stalin explained to them, but we get a few lines on him anyway.) There is no archive material or gaggle of talking heads to be found here, as Mansky builds the film solely from present-day footage of his time spent interviewing and observing the now 89-year-old titan, beginning in his vast home outside Moscow — a loaned gift from former Soviet state leaders — before deteriorating health sends him to a city hospital, upon which filming resumes at the faded headquarters of the Gorbachev Foundation.

Gorbachev is frank about his frailty, as a wintry, ticking-clock atmosphere pervades the film: At some points he speaks as if offering a last testament of sorts, while at others he clams up, as if certain and content that some admissions will never be drawn from him. In either mood, he’s a wry, sometimes mischievous interviewee, often speaking in obtuse contradictions and shrugging off prompts for further explanation: “You can name this conversation ‘Dialogue With a Weirdo,’” he chuckles at the outset. To Mansky’s vocal consternation, he flatly insists that nobody was directly liable for the collapse of the Soviet Union, and that he tried to preserve it, but won’t be drawn on details of this claim.

He’s more forthcoming, amusingly so, on his relationship with Ronald Reagan (“a real dinosaur”), while when the conversation turns to Putin — incidentally glimpsed on TV screens throughout — he resorts to circuitous figurative phrasing that feels at once diplomatic and damning. Charged but never less than cordial, Gorbachev and Mansky’s tête-à-têtes may come as a disappointment to any viewers hoping for a straightforwardly illuminating confessional exercise: “I won’t let anyone make me responsible for their fiction,” he says, though he seems resigned to letting certain fictions persist.

The fascination here lies in watching how the fallen giant elects (or at least hopes) to guard and shape his legacy, blank spaces and all, and in intuiting how much pride, dismay or anger colors his less responsive moments on camera, as Mansky presses on defiantly with his questioning. Often shooting in dusty, somber slices of shadow, Alexandra Ivanova’s elegantly muted camerawork aids considerably in this respect, closely probing Gorbachev’s face and surroundings without feeling harshly invasive.

Meanwhile, the film remains perceptive and involving when Mansky’s blunter tactics let up. As he shifts into a more candid, observational register, we follow him on a visit to his late wife Raisa’s grave, and sit in on low-key New Year’s Eve celebrations at the home of his assistant Volodya. Earlier, we join Gorbachev at his vast, but otherwise unpopulated, dining table for lunch, the octogenarian genially holding court as he grazes on pickles and cold cuts, fondly feeds his aged, scrawny cat, and digresses wistfully into singing folk songs from his youth.

From a simple human stance, the immediate loneliness of the scenario is poignant enough: When the conversation turns Raisa, who passed on 20 years ago, he casually admits that “the meaning of life is gone.” But it takes on a deeper current of loss and sorrow when viewed as the final act of a life that changed history, on to sidle away from that degree of influence, modestly and with little resistance. Though their agreement is never directly voiced, filmmaker and subject appear united in their disappointment at how things have turned out for Russia: “I think there was democracy under Gorbachev and that’s it,” Mansky fumes. Gorbachev, for his part, attempts mordant optimism: They at least have the freedom to speak their mind, he says, to “whoever wants to hear.”