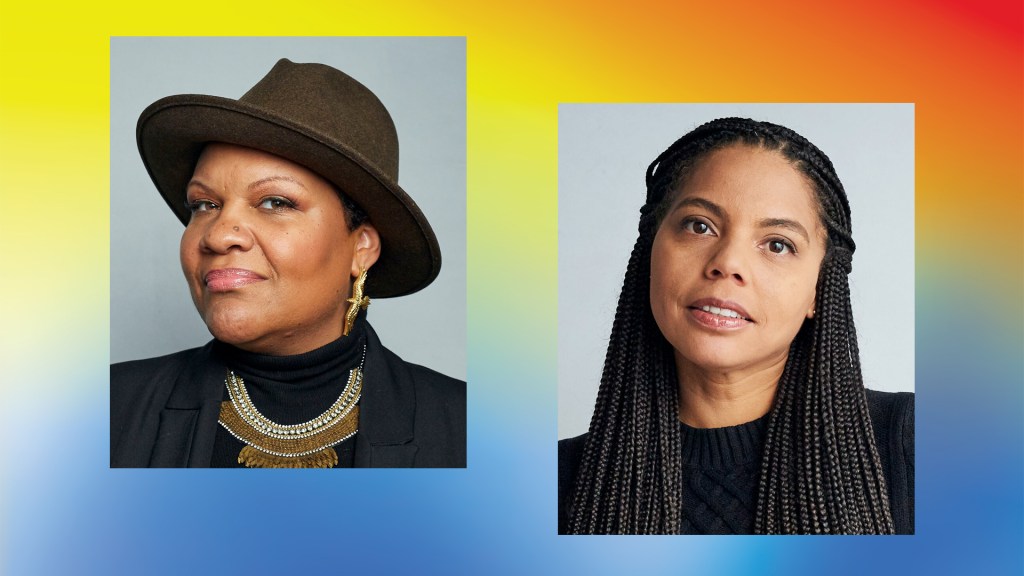 Last January, Radha Blank and Channing Godfrey Peoples were in Park City, Utah, anxiously awaiting their respective Sundance debuts of “The Forty-Year-Old Version” and “Miss Juneteenth,” films they had each fought for six years to get financed.

Blank says she was “immediately invested” in Godfrey Peoples’ movie, “because you can’t help but also look for things that are affirming
what it is that you want to do and say in the world.” She adds: “The level of variety of Black stories takes the pressure off me. It means that one Black story or storyteller isn’t carrying the load of Black existence.”

The specificity through which the two tell their tales sets each film apart, Godfrey Peoples explains, but the core goal remains the same — telling stories that celebrate Black women.

“It was not easy to make a film with a Black woman’s humanity up front. I didn’t get to see that as often as I wanted in cinema, and that inspired me to make these kinds of stories,” Godfrey Peoples says. “Radha and I both made films in totally different regions that have touched on gentrification and Black communities and preserving culture, and you have to be passionate about doing that because I don’t think it’s been seen as commercial or viable or safe, or everybody would be doing it.”

One of the themes these films have in common is how they look at ownership for Black people — how did that relate to your journey
as filmmakers?

Channing Godfrey Peoples: I had the first ideas for the film probably a decade ago, but [my husband and producing partner, Neil Creque Williams and I], in earnest, pushed the film up the hill for about seven years and had to explain what Juneteenth is. And during that time, people weren’t jumping up and down to produce a film about a little-known day. It’s interesting because we released the film in 2020, and George Floyd’s murder happened right around the that time. In one respect, I appreciated that people finally learned what Juneteenth was now, but I think that there’s a whole education we have to do for people to really, really get what it is. Our film celebrates a day acknowledging the fact that the slaves in Texas didn’t find out they were free for two and a half years, so thematically my characters are examining what freedom means to each of them, especially my lead character Turquoise (played by Nicole Beharie).

I think [Radha and I] both made films about the humanity of Black women – as these living, breathing, beings with lives, love interest, and goals, and wants, and dreams, and regrets. It is a rarity to make a film in which a Black woman is up front and especially a Black woman that’s on a journey. I didn’t get to see that as often as I wanted to see them in cinema and that inspired me to make these kind of stories.

Radha Blank: One of things that I heard a lot as a playwright, that I had written into the film in a sequence at the beginning [which ended up getting cut] where you see [my character] having a montage of meetings with different white artistic directors or literary agents and they all go ‘Oh my God Harlem Ave is amazing! What else you got?’ I think the messaging there was, ‘We love this this. You’re talented, that’s not a question, but can you please write something I can easily finance?’ Meaning, maybe you don’t star in it, maybe don’t make it black and white, maybe shoot on a digital file format, maybe put a star in it? Or could you just make it so that white people can relate to it a little bit better?’

So much of what I really experienced as a creative is reflected in the film; I think that’s what I do with my frustration around not being seen, not being valued.

We need more of us in that greenlighting position, the gatekeeper position, but we also need more of us working side by side, to be our advocates. I don’t know if I would’ve been able to make the movie I wanted to make if it wasn’t for Lena Waithe being my producer. Everyone else was like, maybe don’t act in it or maybe act in it, but have someone else direct. She was the only person who did not ask me to compromise one thing — from my appearance to how I speak to who I cast. I got to make my movie because another Black woman was like, “Yeah, we’ll support you.”

Judd Apatow (director of “The 40 Year Old Virgin”) didn’t have a problem with the title, he got it.

Blank: He was actually a really good sport. I thought he and I were going to have our ‘What’s good, Miley’ moment [like Nicki Minaj and Miley Cyrus), but we had a brief exchange where he just said really kind things. For me it wasn’t like, ‘Oh my God I wanted so bad for him to like the movie.’ [But] it was a full circle moment for the people who said ‘Don’t name it that; that’s going to be a curse.’ He completely got my joke, and he got that I was appropriating white culture in the way people have been appropriate Black culture for hundreds of years.

What does it say to you about the industry that these films from Black filmmakers are coming out right now? How does it inspire you as a filmmaker?

Godfrey Peoples: There’s been some really incredible work this year – a couple films that I really loved were “Farewell Amor;” Ekwa Msangi’s film is just stunning. I love “Sylvie’s Love” that just came out. It’s been absolutely inspiring, especially to see Black women telling our stories. Another film that stunned me was Garrett Bradley’s “Time.”

What we don’t see is all the time in which people have fought to tell these stories. We don’t throw up numbers arbitrarily, like it took us seven years [to get this film made], but it really has take us our whole lives to create these kind of stories and especially these incredibly personal stories.

You’ve both earned accolades from the Gotham Awards and Independent Spirit Awards, plus AFI and National Board of Review honors. To date, a Black woman has never been nominated for a best director Oscar. What would that signify if it happens?

Blank: I’m sometimes at odds around what the awards are, who is giving them, and to whom, because there’s one part of my brain that knows if any Black woman is nominated at that level, that would create an opportunity to make the next film. It means you’ve been given this validation, the stamp of approval. And if we could do it, then surely there’s someone right there behind us. Then there’s the other part of me that says our films have historically been overlooked for decades.

It’s an opportunity to be a symbol for the young person who needs it, because they may see that as a particular pinnacle of success, but I also value other forms of success. I got a lovely reception from Julie Dash and Charles Burnett, and my people. So, [an award] would just be some extra icing on an already great slice of cake in spite of how terrible this year was for so many people.

Godfrey Peoples: I think all these Black women that have been passed over for that particular kind of award have been deserving [of winning]. None of us are here by accident. If you actually go into our background, you will see all the work that we’ve put in, in order to be here. Everyone has different stories, but at the end of the day, we’ve approached these films with love and passion, but also craftsmanship and determination and drive. And yes, we absolutely deserve to be considered.