Cher on Kissing Meryl Streep: ‘I Said, ‘Kiss Me!’ And We Just Kissed!’ 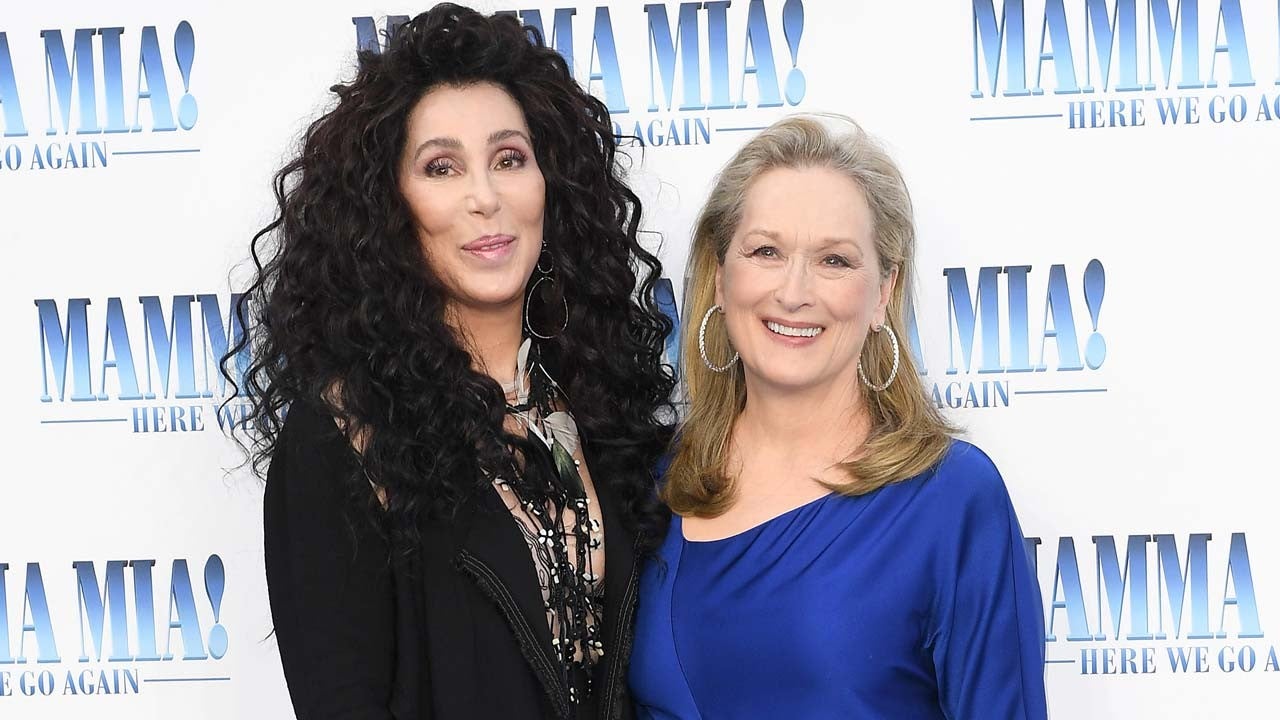 Why did Cher and her Mamma Mia! Here We Go Again co-star Meryl Streep kiss at the film’s London premiere in July?

It’s really very simple: “I said, ‘Kiss me!’ And we just kissed!” Cher told PrideSource in a wide-ranging new interview ahead of the release of her new album of ABBA covers, Dancing Queen.

“We were just thinking it was stupid! It was so dumb!” the 72-year-old icon added, laughing. “Meryl came behind me and I didn’t know it, and then we turned to each other, she looked up at me and she said, ‘You weren’t this tall yesterday!’ And we laughed. And we just kissed! I had on my 10-inch heels, and you can see how tall I am next to her and we just thought it was funny.”

The pop superstar expressed appreciation for Streep’s sense of humor, calling her “wicked funny” and saying “she just will do anything for a lark” – which, seemingly, includes kissing Cher!

Cher had less flattering remarks for President Donald Trump. Though she thinks his impeachment is unlikely because there are smart people “from the dark side” advising him, she contemplated what she might wear to a Trump impeachment party.

“I think I’ll just wear a wedding dress. And a veil,” she said, laughing.

Why full wedding attire? To symbolize “purity and excitement and something new. A new phase!”

Famously outspoken, Cher recalled a recent tweet she wrote that got Trump supporters fired up, even though she considered the remark “really funny.” “I got so much sh– that I didn’t expect,” she said.

When the conversation turned to emojis, Cher decried the lack of them, going as far as to say, “I’m finished with the emojis that we have. … ‘Stick a fork in em’!”

“I really wish there were better emojis,” she explained, adding that, “I wish I had something that was more than the guy who’s got the blue head that is screaming. I wish I had somebody with a scream and his head was coming off the top of his body.”

Currently, Cher’s favorite emojis include “the red-faced one with all the little signs over his mouth, which I always imagine is ‘f**k.'”

“That’s what I put instead of the letters because they just get so angry,” she added. “But also, I use the guy with the zipper across his mouth because I can’t say that. I have little fans, so I have to stop using that.”

Cher explains that she uses cake and the ghost when she’s “really happy,” and if she’s “really, really happy,” she uses them together. And if you’ve been trying to decode another favorite of hers — the poop emoji paired with the bull — that, she says, is “for when I think, ‘Oh, this is such bulls–t.'”

Reflecting on son Chaz Bono coming out to her as lesbian and then, later, as transgender, Cher candidly said, “I didn’t go through it that easily. Both times.”

“I felt, who will this new person be?” she said, revealing she feared who Chaz would become. “Because I know who the person is now, but who will the new person be and how will it work and will I have lost somebody? And then I thought of something else: I thought, my god, if I woke up tomorrow and I was a man, I would be gouging my eyes out. And so I know that if that’s what you feel then that must be so painful that it doesn’t make any difference what anyone else feels or what anyone else thinks.”

Now, she says, “Chaz is so happy now and we get along better than ever.”

Cher also talked about the current pop landscape, just days after the diva shaded Madonna while playing the “5 Second Rule” game on The Ellen DeGeneres Show. On Monday’s episode, she said she’d want to collaborate with Adele and Pink, but not Madonna. As far as other pop icons, like Beyoncé and Taylor Swift — do they have the staying power Cher has demonstrated for six decades?

“But no,” she continued, “I don’t think about [my legacy] too much because it’s like, thinking about it can’t do me any good. It is what it is, and to think about it, what will that get me? Kind of nothing. Also, what’s really great is there’s music left behind and there’s film left behind, you know?

Meryl Streep and Cher Kiss at the ‘Mamma Mia’ Premiere in London — See the Pic!

Cher Reveals the One Singer She Would Never Duet With