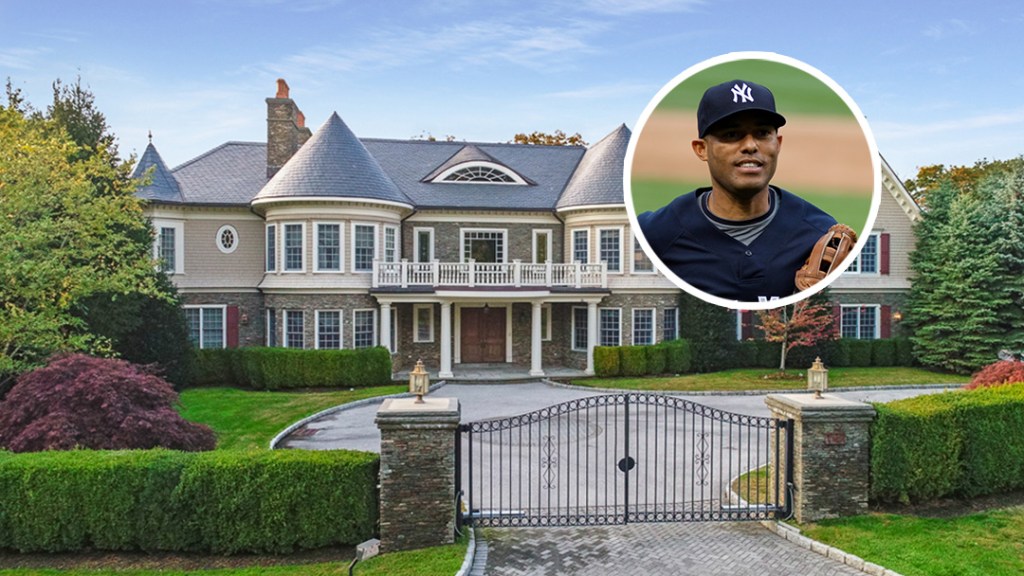 It’s not a very long drive from the bucolic community of Rye in New York’s affluent Westchester County to Yankee Stadium in the Bronx where Panamanian-raised Yankees baseball legend Mariano Rivera plied his pitching prowess during a celebrated 19-season career that stretched from 1995 to 2013. Now, the five-time World Series champion — a 2019 Baseball Hall of Fame inductee who was also awarded the prestigious Presidential Medal of Freedom last year for his philanthropic endeavors — and his wife Clara are striking out of their turreted Rye mansion, listing it for a tad below $4 million. Unfortunately for the couple and their bank account, they are staring down a massive loss on the gated estate they purchased in 2006 for $5.7 million.

With their kids long gone from the premises, the nine-bedroom and eight-bathroom residence, newly built when they bought it, is way too big for a couple of empty nesters. (Indeed, with more than 13,000 square feet, living in the home must be a little like trying to have a romantic dinner in the middle of Yankee Stadium.) A grandiose imperial staircase greets visitors as they step into a creamy tiled marble foyer. Beyond that, yards of light-colored oak flooring unfurl throughout.

A formal sitting room with stacked crown moldings and bay windows is decadently dressed with silk drapes, a chandelier and a grand piano. Armchairs swaddled in giraffe-print fabric add a hint of whimsy, while an adjoining lounge with a coffered ceiling is a far more staid affair with matching baby-blue armchairs and a couple of light brown sofas. Warmed by a traditional fireplace, the baronial formal dining room is an extravagant affair replete with baby-blue silk drapes, an ornate golden mirror and a couple of chandeliers that hang from a coffered ceiling.

Much of the home is decorated in a showy manner that reflects the fashion of the period when it was built. Case in point is the kitchen, with its banks of dark wood cabinets and a cross-hatch patterned tiled backsplash. Elsewhere, a sports bar and lounge clad in dark wood paneling is juxtaposed by a dome-like sun room facing the pool at the back of the house.

Pastoral-themed wallpaper in an opulent powder room is certainly not be to everyone’s taste, and the lavishly swagged French Renaissance-inspired silk drapes, dark oak fireplace mantelpiece in the master bedroom could be seen as a bit over-the-top. Ditto for the dark, carved wood cabinetry in the master bathroom, which is offset by vast expanses of ochre-hued marble tile work and shimmering burgundy and gold brocade wallpaper.

Other amenities include a wood-paneled and leather seated screening room and, in the finished basement, a full kitchen with bottle green cabinets, a games room with stone fireplace and a workout room. Surrounded by a thick wall of mature trees, the grassy grounds offer a built-in grill for summertime barbecues, a basketball court and a swimming pool surrounded by bluestone terracing.

The Riveras previously owned a custom-built Mediterranean style lakefront home in Tampa, Fla., not too far from former team mate Derek Jeter, which they sold last December for $3.2 million after initially listing it in 2010 with a wildly optimistic $9 million price tag.

The listing agent for the Westchester property is Heather Harrison of Compass.