A Tale of Two Houses: Breaking Down Production Design in Kevin Costner Western ‘Let Him Go’

As a modern Western, “Let Him Go” interweaves landscapes of the American West with domestic settings that convey the drama of the characters’ lives. The film, starring Kevin Costner as sheriff George Blackledge and Diane Lane as Maggie, shows the two as they travel across sweeping landscapes to bring their grandson home after their son dies, and take him from the Weboys family.

At the heart of the film are the two houses, the Blackledge home and the Weboys home. The latter is run by Lesley Manville’s Blanche, who is nothing but bad news.

Production designer Trevor Smith is no stranger to working on Western locations, with credits including “Wynonna Earp.” Below Smith breaks down collaborating with director Thomas Bezucha and building the homes.

“The film is very much a journey and travel and movement. Tom, Guy Godfree, the cinematographer and I had to build a matching aesthetic journey so that the audience — even if it’s quiet, implicit, and understated, we see that there is a movement from Montana to North Dakota, from a visual standpoint.

“The Weboy house is where we had to wind up. It’s the dragon’s den and the lair of the villainess. As an audience, they wait so long to get there but it’s talked about and so it was going to be so important to the story.

“The idea was that we wanted it to be like an Andrew Wyeth painting or the house in ‘Days of Heaven,’ with this gothic prairie Victorian quality to it in the middle of nowhere, and the house needed to have this austerity to it.

“It was a fourth or fifth-generation home that has fallen on hard times. Blanche’s boys aren’t exactly what she had hoped, and Blanche talks about it in her dialogue.

“So, we talked about his sense of wounded pride. There’s a level of Victorian decoration so you can feel how nice it used to be and the audience can imagine the beauty that it used to be. 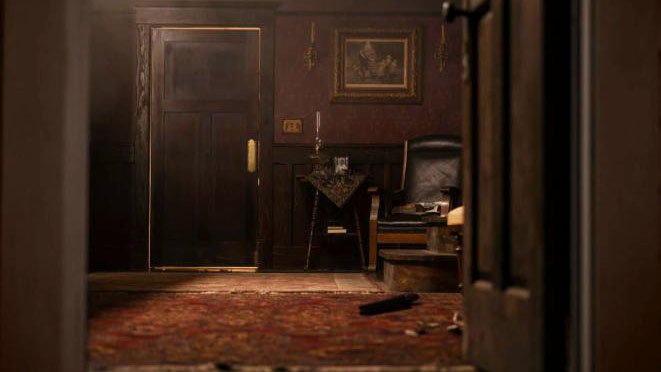 “We built the exterior of the house on location knowing what was going to happen to it in the end, so it was a shell with just enough connective tissue to get us in and out of the back porch covered.

“The rest of the interiors were built-in studio, and that was a challenge for us because we knew it was going to take a long time to build. There’s so much action on the page with George dropping the boy over the railing, we had to look at who was sleeping where, and there was the central staircase which would feed the upstairs and downstairs relationship. There was that double swinging door and all of it had to be worked through.

“We could not cheat as we often do in set design by having the main floor in one place and the second story in another place, so we built the whole house with the two floors. We had to take into consideration the safety elements because of what happens to it, so it was a massive undertaking. 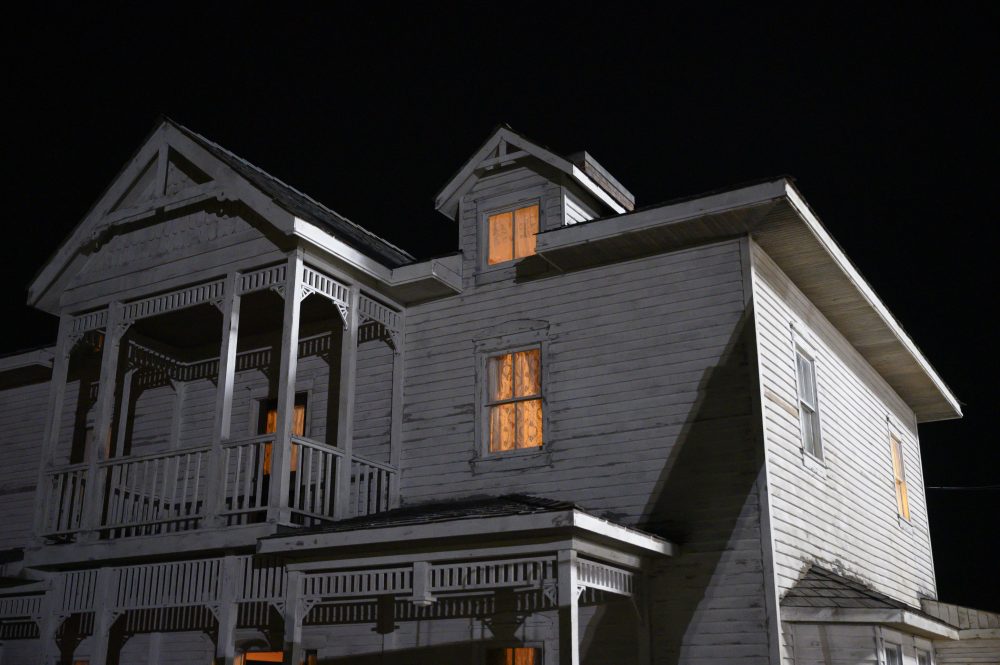 “The house was a derelict white shape, a singular color and form in this otherwise desert-like Valley.

“Tom talked about the color for the inside and wanted it to be like a bruise, and that was my mantra and my approach from the wallpapers to the wood stains and paint choices that had purples and burgundies, almost like the inside of an unwell cadaver.

“Blanche’s reveal was talked about a lot. My set decorator Amber Humphries and I went all over Alberta trying to find the perfect lampshade to go over the top of that table and even when we found a thing it wasn’t quite perfect. We hired a local signwriter who we hired to do some hand-painted work filigree on the lampshade because we had to get it right. That reveal with Blanche, her dress and the cigarette was so important to me and Tom.”

“The Blackledge property was extremely difficult for us to find because we could only find bits and pieces that worked. We wanted to find views of the mountains if we could. We wanted a certain kind of sprawl and topography and flavor to this ranch where they used to be much heavier into equestrian sort of work, but they’ve fallen on leaner times.

“Again, those bedrooms and kitchens all had to have story function. We were running out of time, but I’ll be honest, we had some options that were okay, but there was a wealth of compromises.

“Prep was eroding, and we had to figure out  because it was first in the production schedule — what the Blackledge property was going to be.

“We went looking for some exterior work with some barns and some connective tissue with fences, and we happened upon this property that was strangely close to Calgary, which is good from a travel standpoint. We started to wander around on the property and it had this nice ‘50s feel to it. The barn was amazing. The more we wandered around with it, we decided to look inside the house and the land owner let us in.

“The second we walked in, I could feel the gears turning. The light fell in the right place, the rooms were all there, and it was checking a lot of the boxes.

“We had to knock some walls out for the camera, but, it might have been three weeks before we went to camera that we discovered the Blackledge’s ranch.

“Sometimes these things are gifts. My art department went at it fast and aggressively, but it landed very late in the prep process. The Blackledge’s home is a paradise lost. We wanted their house to feel bountiful and full of promise and hope, and when they lose their son, it’s more a fall-type palette, the leaves have fallen off and the grass is browner.

“The beginning of the film and even when Lorna (played by Kayli Carter) moves to Dalton, there’s still this echoing green. That was the beginning.

“By the time we get to the Weboy’s, there’s the desaturation and color is almost stripped. You’re in a desert, and it’s very much like a Western genre where you have a topographic shift with the final battle or showdown.

“And by the time we get to the Weboy house, it’s almost as if you’re stepping inside a body, a foreshadowing of the blood, bruising and violence.”