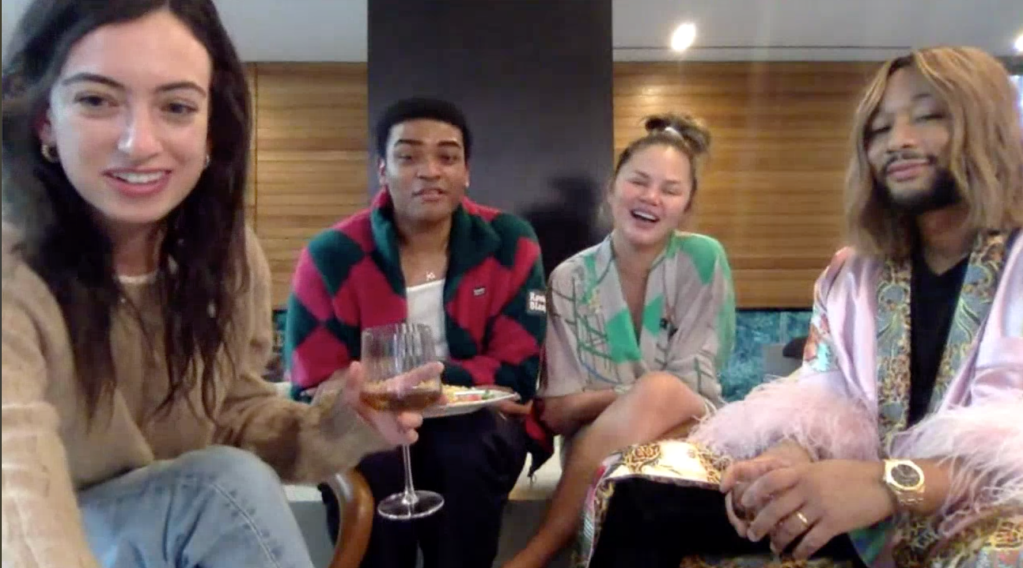 When Cazzie David dropped in on Chrissy Teigen to promote her new book, “No One Asked for This: Essays,” she found her friend worse for wear — until she realized the model and social media giant was not herself, but instead husband John Legend in a wig and silk robe.

Legend played the role of his wife for Wednesday’s virtual Book Soup event without missing a beat, deftly answering David’s (and moderator Owen Thiele’s) questions in typical Teigen style (on the subject of Twitter, for example: “John doesn’t censor me. I’m the mayor of Twitter”).

The true Teigen quickly came into view and clarified for the audience, “We have to explain to them what happened here. I love Cazzie so much and I wanted to do this so badly, but I just have an illness of the mind and I could not to do it today. John stepped in for me,” she said.

Here are five things we learned from the hour-long conversation between David, Legend, Thiele and Teigen.

How John Legend and Chrissy Teigen fell in love

Legend elaborated on how the pair fell in love, saying that Teigen got his attention via text. “She made me laugh all the time on text. We would talk on the phone sometimes, but our banter back and forth on text just made me think, ‘Oh she’s so cool and funny.’ Twitter came out a couple years later and she obviously translated those skills very well to Twitter,” he said.

Teigen jumped in, saying she remembers Legend telling her that she laughed too much when they first met.

“No, I said afterwards that it seemed like she would laugh when she was nervous around new people,” Legend clarified.

How to cope with anxiety

“Lexapro,” shouted Teigen from off-camera. “Twenty to 25 milligrams of Lexapro at night.”

David also opened up about her experience with medication, saying she has taken Xanax every day for the past two weeks in order to manage her anxiety.

“When you need it, use it. There’s nothing to be ashamed of,” said Legend on the subject of mental health medication.

How to grow up in Hollywood

Teigen joked that David, who is Larry David’s daughter, has had every opportunity to be “a little Hollywood bitch.”

“That’s going to be my new Instagram bio,” retorted David.

“You are supposed to! You’re not fighting it, it’s just not who you are,” Teigen replied.

The most annoying part about social media

“Snitch tagging,” said Teigen. “It’s when you’re talking about somebody but you don’t tag them. For instance, someone will be like, ‘Chrissy Teigen is ugly.’ Then, someone will respond to it saying, ‘@chrissyteigen isn’t ugly.’ I’m like, ‘Don’t add me to this conversation. I didn’t need to be apart of this.’”

“The snitch tag is what involves her because it then slams in her mentions. The only way she would have seen it otherwise is if she searched her name spelled out,” added Legend.

David stays away from Twitter. “We both have a fear of people not liking us,” she said to Teigen.

“My greatest fear is being canceled,” Teigen said, explaining that contrary to popular belief, she holds back a lot online.

David: “If your biggest fear is being canceled, then you’re probably always in fear. You just live in fear.”

Teigen: “I am constantly on edge. Is this okay to say?”

Thiele: “But you so openly speak your opinions.”

According to Teigen, there is nothing wrong with posting a thirst trap. “I think it’s insane that people can’t just say, ‘Hey I think I look hot here.’ Instead, it has to be some long ass story,” she said.

David added, “You could just say nothing.”