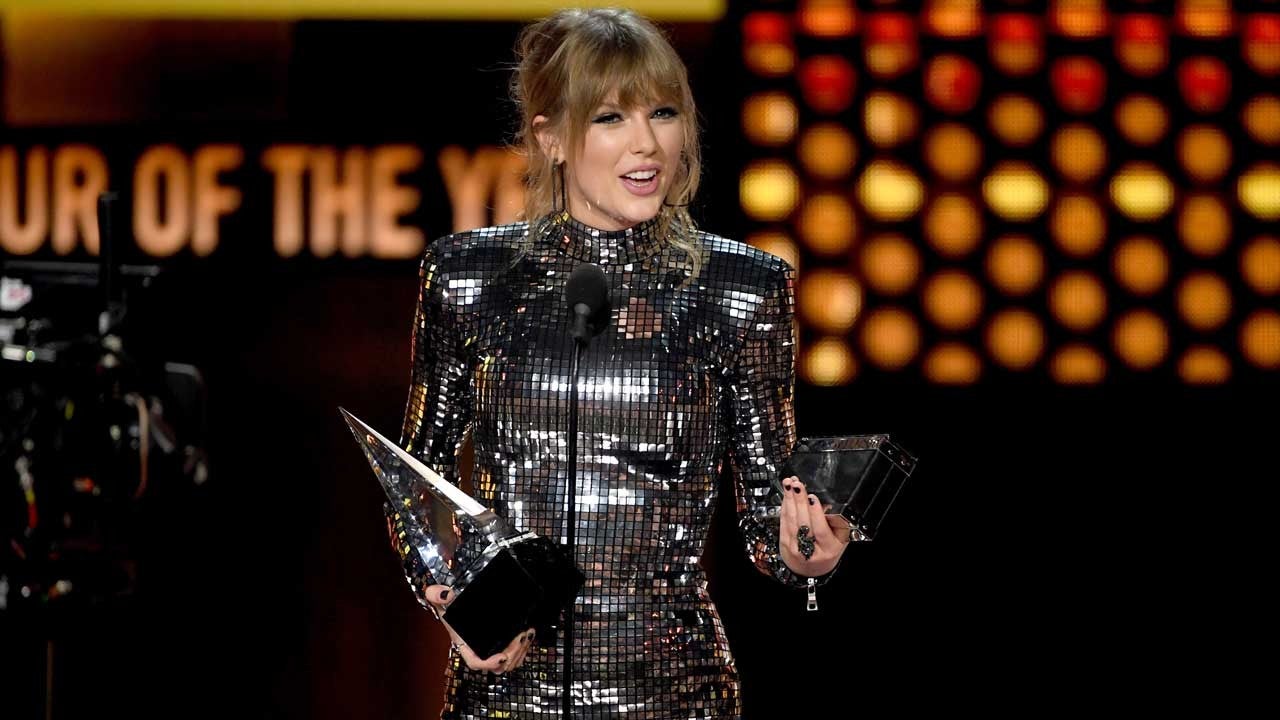 This year’s American Music Awards are getting ready to kick of at the Microsoft Theater in Los Angeles, where some of the biggest names in music are gearing up to take the stage for some bombastic performances and heartfelt acceptance speeches.

Hosted once again for the second year in a row by Black-ish star Tracee Ellis Ross, tonight’s show will see some incredible acts from A-list entertainers, starting with a hotly anticipated opening number from Taylor Swift, marking her first awards show performance in three years!

Cardi B, Camila Cabello, Panic! At the Disco, Mariah Carey and Jennifer Lopez are among just a few of the artists that fans are looking forward to this evening, along with an emotional tribute to the late Queen of Soul, Aretha Franklin. ET is live blogging all the biggest and most memorable moments of the night.

Tracee Gets a Little Political

Does Tracee’s “I’m a Voter” shirt count as one of her costume changes? I guess so… It’s hard to tell.

But, more importantly: VOTE! Do it! Thank you, Tracee, for bringing this up.

And the Award for Soul/R&B Male Goes Too…

Khalid took home the AMA, and his adorable acceptance speech couldn’t have been sweeter. He gave shout outs to his mom, his fans, his family, and its clear he was so excited to win that you cant help but be excited for him!

Ella Mai Goes Out Into the Crowd

For the 23-year-old singer’s AMA performance of her song “Boo’d Up,” she went out into the audience to perform in the aisle, and it was the perfect, simple counterbalance to the pyrotechnics and wild stage theatrics that we’ve gotten thus far tonight.

Zedd and Shawn Mendes Get Some Love

Returning to commercial with a performance from Zedd (on piano) and Shawn Mendes (on guitar), was a great choice — mostly just because of Shawn’s winning smile.

They performed their collab “Lost in Japan,” and there were moments it was hard to hear them over their screaming fans.

The singer — who is still radiating the sensuality of the early 2000s — looked like the center of a blossoming flower made of shirtless men.

Carey — who has turned looking like a fuchsia mermaid into an art form — knows how to put on a good performance and knows how to look like a regal goddess. Although having a dozen half-naked heartthrobs literally bowing down to you helps with that look.

And the Tour of the Year Winner Is…

First Taylor slayed the opening number, and then she took home this AMA for her Reputation Tour. If she wins two more, she becomes the most awarded artist in AMAs history.

In her acceptance speech (where she looked epic in a silver futuristic dress), she thanked literally everyone who was involved with her tour, including her fans.

You gotta admit, she knows how to win an award.

And the Pop/Rock Male Winner Is…

It’s important to give him some credit for his super short acceptance speech, as well as his powder blue suit emblazoned with his own initials and the image of a snake. It made him look like a classy matador, and I mean that in the absolute best way.

Twenty One Pilots Rocks the Stage

After getting an introduction from Amber Heard, Twenty One Pilots took the stage for a surreal performance behind a projected screen that was the perfect level of surreal, exciting and epilepsy-inducing.

The rock duo performed their new single “Jumpsuit,” and you gotta ask yourself how many AMA acts have a rusted out, burning car as the centerpiece for the performance.

When Tracee returned to the stage after the first commercial break, she looked like a super fancy golden disco ball in one of her 13 outfits for the night.

And the Rap/Hip-Hop Artist Winner Is…

Invasion of Privacy rapper Cardi B took home the award!

Cardi’s massive floral dress almost kept her from getting on stage to accept the award, but when she got up there she slayed her speech. She thanked her daughter, Kulture, and her husband, Offset, and was effortlessly charismatic.

Tracee Ellis Ross Knows How to Kick Things Off Right

The Black-ish star isn’t messing around in her sophomore emcee-ing effort. Tracee was joined by 20 backup dancers for her opening dance number — which even an on-stage costume change — as she recreated some of the best dances from from the hottest songs of all time.

From Donald Glover’s epic “This Is America” music video to the moves from “Uptown Funk,” Tracee killed it in a black sequined leotard — even if it did tire her out so much she had a hard to talking.

The host told ET earlier this week that fans can expect a “baker’s dozen” costume changes throughout the show — topping her 11 from last year. So keep an eye out for her many, many stylish ensembles.

No, But Seriously, Taylor Swift Killed It

It’s hard to come off as a sexy necromancer, but somehow Taylor pulled it off, and therefore deserves two mentions in this live blog.

More flames! More sparks! A cameo from her giant cobra in the background!? This opening number just keeps building and let’s just forget the awards show and make this a Taylor Swift concert. Everybody good with that? Okay, cool.

Taylor Swift Opens Up the AMAs With a Bang

For Taylor’s first awards show performance in three years, the 28-year-old songstress debuted her new song “I Did Something Bad,” and there was absolutely nothing bad at all with the incredible performance.

After a retrospective introduction that made it feel like she was winning some sort of lifetime achievement award, Taylor hit the stage standing in a shimmering black ensemble above a pile of zombie dancers, and instantly we got crazy Thriller vibes.

We’re definitely here for her fierce looks and dominant energy. Taylor knows how to rule a stage with just her voice, but the flawless pyrotechnics sure help.

What a way to kick off an awards show!